It’s Brand Calendar Week here at the brewery and we couldn’t be more excited to share with you a few of the amazing offerings we’ll have for you in 2022. Of course, we still have to keep a few surprises up our sleeves so get ready for more announcements in the coming year by following us on Instagram, Facebook, Twitter and TikTok!

Well now that that’s out of the way, let’s get to it! 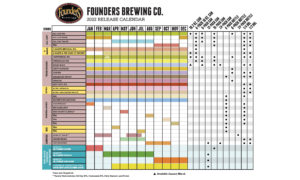 Our full 2022 Brand Calendar is here! Alongside year-round offerings and returning favorites like All Day Vacay and Oktoberfest, you’ll find a plethora of new releases and deep-cut classics, like Frootwood, making an appearance.

Check it out and see if any of your old favorites are returning or if you spy any new brands you’ll just have to try. And yes, there are a lot of TBAs but we don’t want to ruin ALL the surprises. Stay tuned for more reveals throughout 2022! 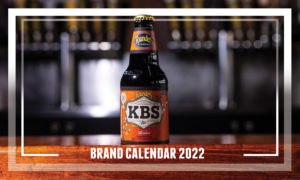 The perfectly balanced and decadent drinking experience of KBS meets the classic taste of hazelnut. Taking this bourbon barrel-aged stout to a new level, KBS Hazelnut allows the existing premium coffee and chocolate notes to soar to new heights when accented by the nutty sweetness of hazelnut. 12.0% ABV.

Releasing in our taprooms in March (and shortly thereafter nationally), KBS Hazelnut will be available in 4-packs of 12oz bottles and on draft as our first Barrel-Aged Series release of 2022.

This is our fourth KBS variant after Espresso, Maple Mackinac Fudge and Cinnamon Vanilla Cocoa – and we truly believe it’s our best one yet!

Oh, and do you notice anything different about the packaging? Our KBS line is getting a glow-up in 2022 as well. Stay tuned for more details. 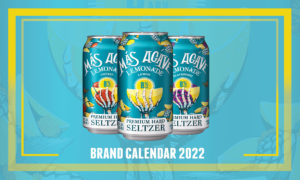 Más Agave Lemonade Premium Hard Seltzer will be available only in Michigan in 12-packs of 12oz cans starting in March. 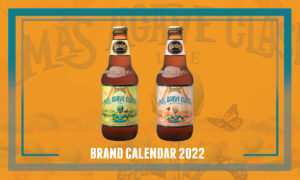 We love cocktails, like really love them. If you ask us, few are more refreshing than the tart and tangy margarita and this barrel-aged beer pays tribute to that perennial classic. We took an imperial gose brewed with agave nectar, lime and sea salt and then aged it in tequila barrels. Consider it a party in a bottle. ¡Más Agave Clásica Lime! 10.0% ABV.

And, with Más Agave Clásica Grapefruit, the cocktail inspiration lives on!

Our imperial gose is brewed with agave nectar and sea salt before being aged in tequila barrels. But it doesn’t end there. Once it’s pulled from the barrels, it gets a dose of grapefruit juice to ramp up the tanginess. Sweet, salty, and mouth-puckeringly delicious. ¡Más Agave Clásica Grapefruit! 9.7% ABV.

Look for Más Agave Clásica Lime & Grapefruit to return in May 2022 on draft and in 4-packs of 12oz bottles.

4 Giants And The Haze Of Destiny

That rumbling sound you hear is the imminent arrival of a brand new entry to the 4 Giants IPA lineup. The Giants have been summoned and this they’re bringing with them a brand new hazy IPA. 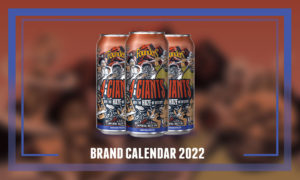 The Haze of Destiny has been awakened! A big, bold Imperial Hazy IPA, 4 Giants and The Haze Of Destiny is smoothed out by copious amounts of oats and wheat to create an inviting yet mysterious haze –  don’t let it fool you, this behemoth of a beer is not to be handled lightly. Fulfill your destiny with 4 Giants and the Haze of Destiny! 8.4% ABV.

To accompany the release of 4 Giants and The Haze Of Destiny, expect the launch of a brand new way of interacting with our beer. The 4 Giants will come to life in a way the beer world has never seen before, with interactive storytelling content in an immersive world that puts you in the story right alongside them. Are you ready to Summon the Giants and save The Realm? All will be revealed in time!

Want to be among the first to know about upcoming beer releases? Why not join Cadre, our VIP enthusiasts group, and get the lowdown on exciting developments at our brewery long before the general public does!