We’re excited to announce 15-pack cans of All Day IPA will begin shipping to our distributor partners in March, replacing All Day IPA 12-pack cans without raising the suggested retail price. 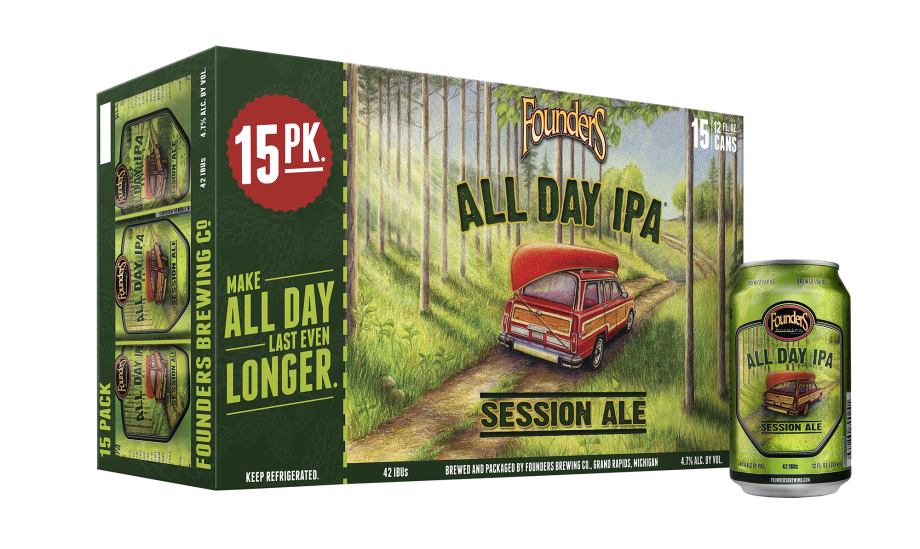 This is the first time a major craft brewery has put out a 15-pack.

“We are able to offer 15-pack cans due to production efficiencies from packaging cost savings,” said Co-Founder Mike Stevens. “We’re excited to pass the savings on to our customers as a way of saying thank you for their reception of All Day IPA.”

Developing the All Day IPA recipe was no easy task. “We recognized the need for a full-flavored IPA with a lower ABV,” said Co-Founder Dave Engbers. “The challenge was creating a beer that had intense hop aromatics balanced with the malts without packing a big ABV punch.”

Following a limited release in 2012 due to hop shortages, we were able to send All Day IPA to all of our markets in February 2013, and it quickly became our leading seller. We moved the beer from our seasonal to our year-round lineup in July of last year. All Day IPA was the first Founders product to be released in cans; 12-pack cans of the beer hit the market in August 2013.

All Day IPA is a 4.7% ABV session ale, brewed with Simcoe and Amarillo hops and measuring out at 42 IBUs. We set our minds to brewing this beer because we wanted an American IPA that worked with an active lifestyle. It has won numerous awards, including a silver medal in the session beer category at the GABF in 2010 under a working name and, most recently, a 2014 Good Food Award.

Centennial IPA, the newest addition to our canned offerings, will remain in 12-packs. All Day IPA will still be available in the traditional six-pack bottles in addition to 15-pack cans. Other beers from our portfolio may be canned, as well, but those brands have yet to be determined.

12 Comments on “All Day IPA 15-Packs Coming This Spring”