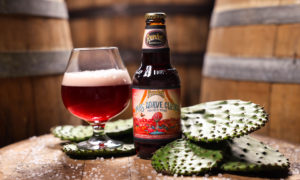 An oasis of flavor in the desert of normalcy, this cocktail-inspired imperial gose is brewed with agave and sea salt then aged in tequila barrels. When it emerges we hit it with a healthy dose of prickly pear extract, lending the liquid its flamboyant fuchsia glow and mellowing out the tangy tartness with hints of berry and melon. It’s no mirage, it’s the real deal. ¡Más Agave Clásica Prickly Pear! 9.7% ABV.