The holidays are approaching quickly, so what better time to reveal the next entry in our Mothership Series? You’ve met Blushing Monk and its cousin, Blushing Padre, now it’s time to say, “Season’s Greetings!” to the more festive member of the Blushing family… 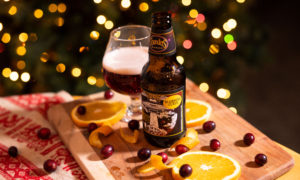 A festive take on Blushing Padre, this raspberry Belgian ale was aged in tequila barrels before being hit with enough cranberries and orange zest to make any mouth feel merry this holiday season. Blushing Claus presents a pleasant yet slightly aggressive tartness alongside the existing tequila and raspberry sweetness – making it the perfect beer for anyone who made the nice list this year. 11.9% ABV.

Blushing Claus will be released exclusively at our Grand Rapids and Detroit taprooms on December 15 in the traditional Mothership Series 6-pack and 12oz bottles.

Linkedin
« Cadre Update: New Mothership Series
Cadre Update: Mas Agave Clasica Lime & Grapefruit »
« Previous Post
Next Post »
We use cookies on our website to give you the most relevant experience by remembering your preferences and repeat visits. By using this site, you agree with our use of cookies. Learn More
Cookie SettingsACCEPT
Manage consent