Warmer weather is upon us and we thought we’d help usher in that summer feeling with a new beer announcement! We’d like to introduce you to the next entry in our Brewed for MI Series – you know it, you love it, it’s time for the grand return of: 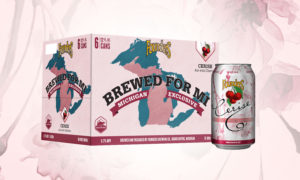 There are a few things that are quintessentially ‘Michigan’ and many would argue that cherries top that list. We brewed Cerise as a celebration of our home state’s official fruit, showcasing what Northern Michigan does best. Ruby red in color and brewed with 100% tart, Michigan cherries, Cerise is as close as you’ll get to tasting the real thing without picking it off the tree. 5.7% ABV.

Cerise 6-pack cans will be available in our Grand Rapids and Detroit taprooms on June 26. It will also start shipping across the state and should show up in select accounts at the end of June/early July.

Each release in the Brewed for MI Series aims to raise awareness for Michigan-based non-profits through our corporate giving platform, The Big Pitcher.  All causes we support fall under three categories: Social Justice, Environment and Arts & Culture and range from local, MI-based organizations to those that operate on a national-level. This release will raise awareness for Fair and Equal Michigan, a growing coalition of grassroots citizens, LGBTQ groups, business, political and philanthropic leaders that have joined together to help prohibit discrimination against the LGBTQ community.