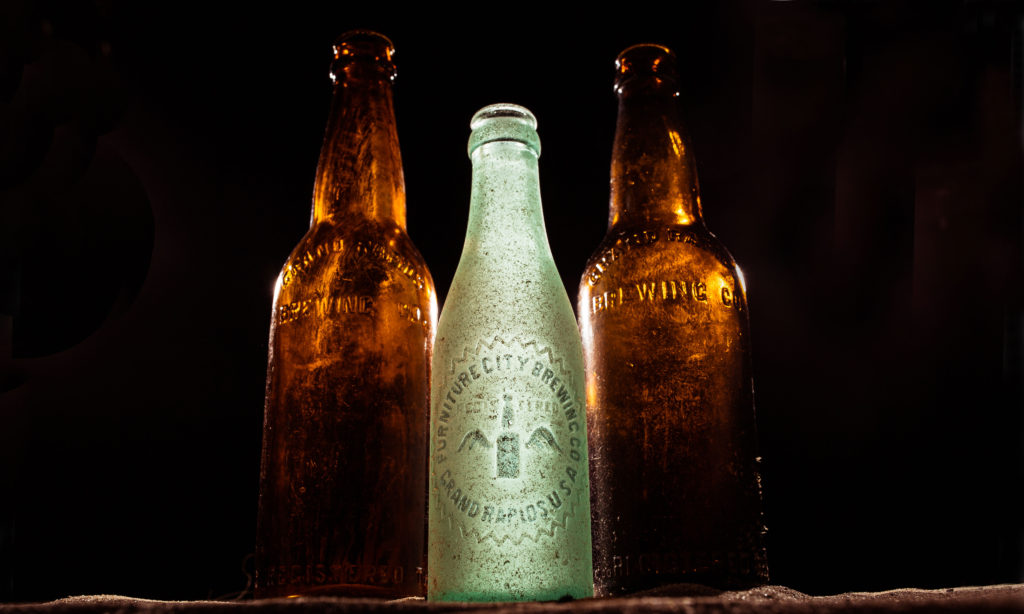 Not long ago, we received a call from a gentleman named Chuck about some beer bottles he had in his possession. Not just any bottles (we’ve got plenty of those). Old bottles. Like, really, really old. Found at the bottom of a lake. Chuck wanted these bottles to go to a good home, so he called us up. He mentioned he’d be visiting Grand Rapids, and would we be interested in setting up an exchange? C’mon. Of course, we were interested.

Some info on Chuck: having grown up in Michigan, he spent much of his time outdoors, swimming in the countless lakes that dot the landscape. He began diving back in the 60s and received his SCUBA certification in 1967. Over his decades of diving, he’s visited a lot of lakes. As you might imagine, he’s found a number of random items at the bottom of these lakes, namely, old bottles.

So, Chuck would hang onto the more remarkable bottles he’d find diving. Over the years, he grew quite the collection. He had bottles ranging from “picnic flasks” to medicine bottles to beer bottles, many of which dated to the late 1800s and early-1900s. Recently, Chuck began the process of offloading some of the bottles from his collection to people who share a relevant tie. And that’s how he got a hold of us! He had three bottles he wanted to share with us, one from Furniture City Brewing Co. and two from Grand Rapids Brewing Co. Both of these breweries were based in downtown Grand Rapids in the late 1800s and early 1900s. When Prohibition was enacted in 1919, they both shut down (Grand Rapids Brewing Co. has since reopened but that’s another story). Check out this excellent 2012 mlive article for more info on the history of brewing in Grand Rapids.

Chuck did some research and, based on the seaming of the bottles, guessed they’re from the early 1900s (likely pre-1903). He found these bottles in Torch Lake and likely, Lake Huron. Fun fact: they weigh probably ten times more than a modern bottle (~3/4lb).

We’re so grateful to Chuck for considering us to provide a good home for his bottles. Check them out on display in our Grand Rapids taproom!