You spoke up and we listened – the next Detroit entry in our Crafted In Michigan Collaboration Series shifts things into a higher gear and we think you’re wheely going to like it. Get ready to meet… 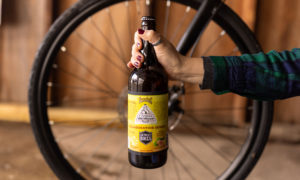 You don’t need to be an avid cyclist to appreciate Mid Ride, our collaboration with Detroit Bikes and part of our Crafted In Michigan Collaboration Series, but it sure doesn’t hurt! This New England Style Pale Ale Brewed with Citra hops is perfect for pit stops on group rides, long-distance treks to parts unknown or even a bikeless night at home – but that’s no fun at all, is it?

Releasing on March 25 at 11am at our Grand Rapids taproom and 4pm at our Detroit taproom, Mid Ride will be available on draft and in limited quantities of 750mL bottles with a two-bottle limit.

And that’s not all! Our Detroit taproom will host a release party starting at 4pm selling merch, displaying bikes and just kind of hanging out in general. We’ll also be giving away a custom Founders Crafted In Michigan bike to one lucky customer that attends the event!

Linkedin
« Crafted In Michigan Collaboration Series: Mid Ride
Crafted In Michigan Collaboration Series: The Reunion »
« Previous Post
Next Post »
We use cookies on our website to give you the most relevant experience by remembering your preferences and repeat visits. By using this site, you agree with our use of cookies. Learn More
Cookie SettingsACCEPT
Manage consent