Cold IPAs: What’s In A Name?

India Pale Ales (IPAs) are the leading category of craft beer in the United States. Though some of you are quite vocal about your distaste for the style, IPAs continue to innovate and show no sign of slowing down. By definition, IPAs are hop-forward, robust beers made with ale yeast (Saccharomyces cerevisiae). Notable IPAs of ours include Centennial IPA, 4 Giants Imperial IPA, Unraveled Juicy IPA and All Day IPA.

There’s a lot of debate and head-scratching involved in identifying just what makes one of the newer craft beer trends, the Cold IPA, both “cold” and an “IPA.” But you’re in luck! With a little help from Wade, our Microbiology and Food Safety Manager, and Jason, our Sensory Specialist, we’re here to set the record straight. 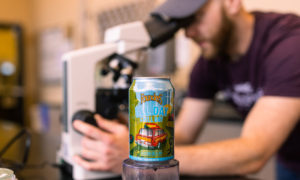 Don’t Call It An IPL

The Cold IPA style is similar to a dry-hopped India Pale Lager, but there are some distinctions. The first Cold IPA description was by Kevin Davey of Wayfinder Beer in Portland, Oregon. He explained the style as a unique style with characteristics of a New England IPA and a West Coast IPA, but it is defined by lager yeast fermentation and high levels of adjuncts (e.g., corn).

We’ve always strived to push the limits of taste through innovation and experimentation. The latest example is All Day Chill Day – our version of a Session Cold IPA. It’s a beer brewed at colder fermentation temperatures to exhibit a clean and crisp flavor packed with floral, pineapple, and lemon notes. We use our house lager yeast for fermentation. It’s the same yeast strain that we use to make Solid Gold.

Hopefully, this clears things up so you can spend less time debating styles and more time enjoying a nice, cold All Day Chill Day.

Linkedin
« Crafted In Michigan Collaboration Series: Oatmeal Honey Stout
French Toast Bastard »
« Previous Post
Next Post »
We use cookies on our website to give you the most relevant experience by remembering your preferences and repeat visits. By using this site, you agree with our use of cookies. Learn More
Cookie SettingsACCEPT
Manage consent