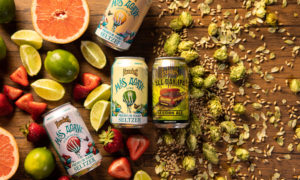 Beer Versus Seltzer: The Process

Both beer and seltzer use a distinct type of sugar that, when combined with yeast, turns to alcohol. The true difference between the two beverages comes down to what is being fermented. With beer, malted grains are mashed in to make wort (pulling out sugars in the process). The wort is boiled then cooled (hops are also traditionally added during the boil) and yeast is added and the entire mix turns into the tasty beer you know and love.

So what did we learn today? With beer and hard seltzer, yeast chomps up a form of sugar to create alcohol. Hard seltzer starts out clear, using nothing but sugar and water gives us carte blanche to add whatever fruit juice and flavors we want! It also allows us to control carbs and maintain a lower calorie count. Beer receives its color from the grains, notably absent from the hard seltzer process. Both liquids are treated to the same high-quality brewing process you’d expect from our brewery. So there you have it!

Linkedin
« Exclusive Cadre Merchandise
New Beer Release: Scarlet Dawn Session Red IPA »
« Previous Post
Next Post »
We use cookies on our website to give you the most relevant experience by remembering your preferences and repeat visits. By using this site, you agree with our use of cookies. Learn More
Cookie SettingsACCEPT
Manage consent