We asked our Brewing Manager, Adam Schmitt, and our Microbiologist, Wade Begrow, to share some advice to those considering homebrewing as a hobby. Here’s what they had to say:

Looking for a recipe to kick things off? Adam was kind enough to share a recipe for a cream ale he has dubbed “The Don” after a friend’s dad who is a big fan of light lagers. Check it out below and, if you end up brewing it, let us know how it goes!

The idea for this beer started out as a traditional cream ale. It morphed into a low ABV, crisp, hoppy cream ale, and as you can see from the recipe sheet (below), I felt the need to make even more changes throughout the brew day.

This was a simple brew, which made for a quick brew day, and a fantastic end result. Even though there was a decent amount of hop volume added to the beer, it didn’t have any vegetal character, and was filled with soft fruity notes.

Below are the bulleted points from the brew day, as well as equipment I use. (Everything was thoroughly sanitized before use) 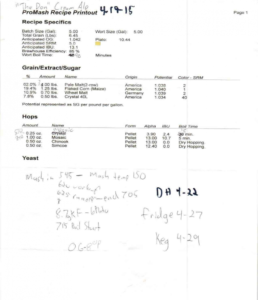 2 Comments on “Homebrew Advice from Our Resident Homebrewers”