Yojimbo is triple fun! Based out of New Orleans their sound is pure punk rock energy with poppy driven melodies. You’ll be powerless to do anything except dance uncontrollably with a huge grin.  Carly Meyers leads the pack down a musical rabbit hole, wielding her trombone like “a mystical samurai sword”. While Doc Sharp hammers the keyboards in cataclysmic pleasure and Adam Gertner beats his drums to a bloody pulp with a deliberate smile.

Their latest album “Ghost Birthdays” set to release November 2014 will be their first release with Carly’s vocals.  Recorded in Kansas City, Missouri, by the brilliant analog engineer Chad Meise, all the songs are originals except for one surprise movie theme!

Playing shows at local favorites such as Blue Nile, Maison, One Eyed Jack’s, The Republic and the legendary Tipitina’s, this band remains a constant and respected act in the Big Easy. They have headlined with artists such as Bonerama, Marco Benevento, and Skerik.

Separately they have played at venues all over the country, gigging at clubs, festivals and arenas with major artists like Clutch, Primus and Fishbone. When the members of Yojimbo join forces, the music is wild, versatile, and a big something else that you’ll need to see to believe.  Yojimbo produces an “unmistakable youthful playfulness that is infectious to all listeners and creates an instant party atmosphere” -Live Music Nola.

As one reviewer declared, “Yojimbo’s… the perfect blend of aggressive passion, punk rock chaos and technical expertise.” Don’t ever miss a live Yojimbo show for the pure energy rush! 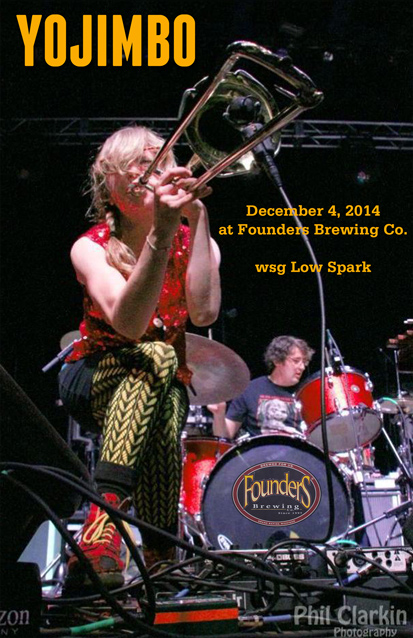