Busking outside of countless Bay Area venues, Tumbleweed Wanderers took stage on the streets of San Francisco with hopes of, simply, sharing their music. Imagine a hat filled with crumpled dollars and a small crowd gathered- smiling and swaying to the beat of a washboard, mandolin, banjo and guitar. Because of dedication, drive and pure stubborn persistence- in two short years the band went from playing sidewalk jam sessions to headlining those venues. From acoustic sets to electric rock explosions. From the crowd swaying in the open air to throwing down in a jam-packed club.

The story and sound of Tumbleweed Wanderers — an Americana inspired mix of soul and classic rock-n-roll — spread throughout the Bay, the West Coast and across the country, essentially, independently. Through constant touring, supporting some of the best road warriors in the game (Moon Taxi, Greensky Bluegrass, Angus Stone, Jackie Green, The Revivalists) and wowing audiences at major festivals (Outside Lands, Hangout, Shaky Knees, and Hardly Strictly Bluegrass) the band solidified themselves as a not-to-be-missed live experience.

Now, after a year in the making, Tumbleweed Wanderers new album, Realize, is set to showcase the evolution of this talented rock band. For Realize, Tumbleweed Wanderers demoed over twenty songs in a San Francisco mansion-turned-home-studio; as well as, cutting fifteen basic tracks at Panoramic Studios in Stinson Beach. These tracks were incessantly overdubbed, rearranged and tweaked for months on end. Their layers of harmonies, guitars, keyboards, string quartets, and pedal steels added unparalleled dynamics throughout the album.
After whittling the record down to the tightest eleven songs, they recruited Brian Deck (Iron & Wine, Modest Mouse) to provide the fresh ears and creative spark needed to mix the record. Brian Lucey (Black Keys, Arctic Monkeys) was brought on board to master the album, giving it the rock-n-roll sheen they tenaciously sought. The final product, available late Spring 2015, represents Tumbleweed Wanderers in their most honest state – a deep, and colorful blending of the band’s collective influences stemming from a kaleidoscope of American traditions: soul, Americana, psychedelic– all grounded in a fearless backbone of pure rock-n-roll. 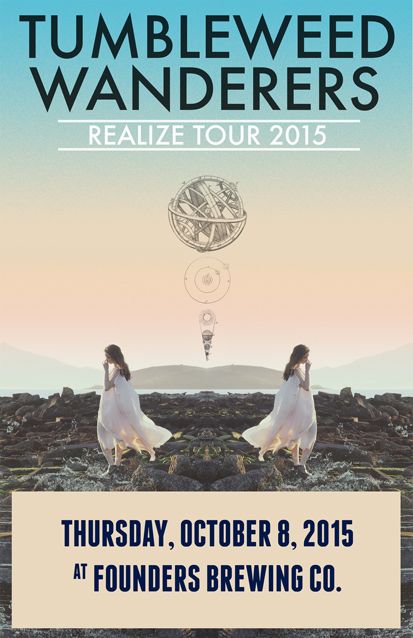