The Rooks (Indie Soul and R&B from New York City)

Based in New York City, The Rad Trads have quickly gained a reputation as one of New York’s most entertaining live acts. They bring their love of the game to a diverse style of soulful American music, with influences ranging from early jazz to New Orleans brass band, R&B, the Chicago and delta blues, and rock & roll. Featuring four powerful horns, a driving rhythm section, and three captivating lead vocalists, The Rad Trads consistently win over audiences with their relentless energy, charisma, and enthusiasm. The band performs regularly in NYC at Brooklyn Bowl, Webster Hall, The Blue Note, BB King’s and Radegast Hall when not touring across the USA and Europe. Notable 2014 festival performances included the Portland Waterfront Blues Festival, Edinburgh Jazz & Blues Festival, Ambria Jazz Festival (Italy), SILDA Jazz Festival (Norway) and Opening Day for the Detroit Tigers. Members of The Rad Trads continue to perform with top groups such as Truth & Soul Record’s “Lee Fields & The Expressions,” “Lady,” EMEFE, Broadway giant Jason Robert Brown, and have performed or recorded with artists such as Deer Tick, Jonathan Batiste & Stay Human, Antibalas, St. Paul & The Broken Bones, Ikebe Shakedown, Lenny Pickett, and Joe Lovano among many others. 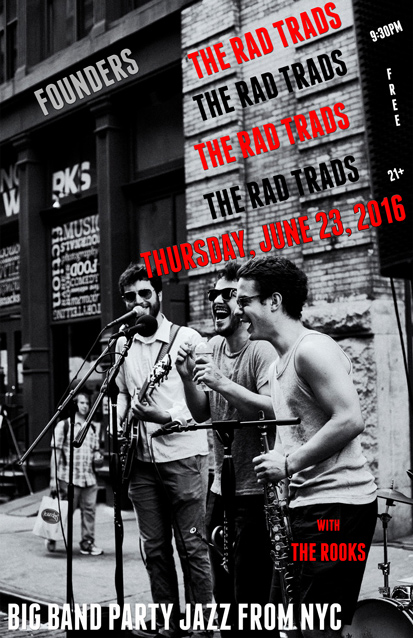