The Moxie Strings is the electrifying combination of fiddler, Diana Ladio, and cellist, Alison Lynn. With their feel-good melodies and foot-stomping, rock-influenced rhythms, this duo has put a fresh, enticing spin on Celtic and Americana music. Diana and Alison often join forces with dynamic drummer and world percussionist, Fritz McGirr, who lends his spirited expertise of traditional music’s percussion component and an engaging rhythmic energy to the show. Though rooted in tradition, The Moxie Strings offer listeners the unique opportunity to experience some of the world’s best known instruments and oldest genres through a young, progressive lens.

Diana, Alison and Fritz hold Bachelor of Music degrees in music performance and music education, which have given each the technical foundation to explore the limits of his/her instrument, and helped the group build a reputation for musical excellence. Both Diana and Alison use a variety of audio effects pedals. Alison performs on a newly invented, electric instrument and Fritz on a variety of world percussion instruments in celebration of their generation’s redefinition of folk music. The Moxie Strings write the majority of their pieces, and also arrange traditional tunes from many countries.

Soon after forming in 2007, The Moxie Strings were inspired to not only perform, but also to teach. Having made the exploratory journey from classical music to a world of eclecticism and musical creativity, the three have now dedicated their careers to helping young musicians make this life-changing and inspiring transition.

The Moxie Strings have taught enrichment clinics in over 60 schools throughout the US and have also presented on their research and methodologies to many teachers at music education professional development conferences. During most clinics, the group performs for students on electric instruments, teaches music by ear, and introduces non-classical playing styles. The Moxie Strings have researched and created an innovative sequence of activities designed to teach improvisation to classically trained musicians, which they employ at every clinic. They have written several orchestral accompaniments for their pieces and often perform with students on community concerts. The Moxie Strings deliver their message in a fun, accessible way, and stand before students as an illustration of the many opportunities that music holds.

The band is now based in southern Michigan, and tours extensively throughout the United States both playing shows and teaching clinics. The Moxie Strings’ ear-catching originals, dance-worthy, traditional tunes, and dedication to inspiring young musicians have quickly made it one of the country’s most promising instrumental acts. 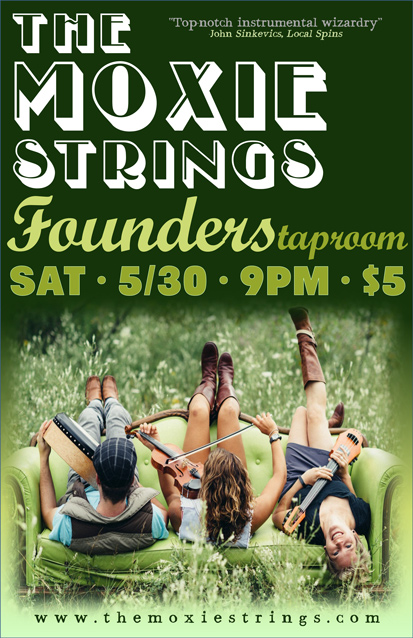