The energetic five-piece found its roots in Bloomington Indiana’s surprisingly vibrant live music scene, and they have been leaving audiences “Freshly Squozen” since 2010.

Their ability to fluidly blend and bend genres is unparalleled, and creates for an unforgettable live experience. Every performance is different from the last, showcasing each member’s virtuosic talent with soulful vocals, intricate jams, tight grooves and powerful solos.

Since their inception, The Main Squeeze has amassed a remarkably loyal and rapidly growing national fan base. They’ve graced the stages at some of the country’s biggest festivals, including: Bonnaroo, Electric Forest, Phases of the Moon and Gathering of The Vibes. In addition, they put their stamp on the Rolling Stone Super Bowl XLVI Pre-Party and dazzled music lovers at the International Battle of the Bands in Macau. Having shared the stage with artists like The Roots, Jane’s Addiction, The Meters, Aloe Blacc and Trombone Shorty, The Main Squeeze continues to catch the ear of industry giants.

Now based in Chicago, The Main Squeeze is working with legendary producer, Randy Jackson, to put the finishing touches on their sophomore album. The band’s self-titled debut was released in 2012, and is available for purchase on iTunes and Amazon.

As their fan base continues to multiply, and their unique sound, contagious energy, and unrivaled talent continue to mesmerize audiences, The Main Squeeze is poised for a meteoric rise in the world of music. Make sure to climb aboard for the ride. 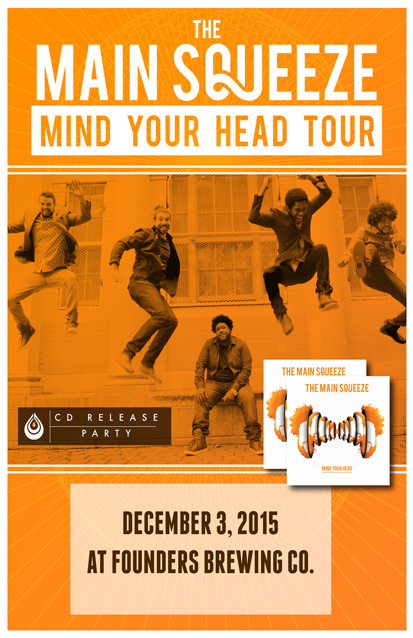