The Bootstrap Boys
The Bootstrap Boys are a four-piece country band based in Grand Rapids, MI, The Bootstrap Boys have developed a unique sound that takes ita cues from that particular mix of country and gospel found in the small churches of rural Michigan, spiced with the redneck flavor of the small town honky tonks of the Midwest. While tunes about whiskey shots and getting stoned have landed The Boys with the brand “outlaw”, there’s more to their music to be found. There’s no shortage of thoughtful, well-crafted lyrics written by lead singer, Big Jake Bootstrap.

Big Jake started with the simple idea of getting back to his roots and making a country album after several rock & roll and singer/songwriter style projects in the late ‘90s through 2015, when he approached some old friends about forming a band around the project and in 2015 The Bootstrap Boys were born. The Bootstrap Boys are: Big Jake Bootstrap, Nicky Bootstrap, Clyde Bootstrap, and Jeff Bootstrap.

Starting with the old cowboy and traditional tunes made famous by acts such as Sons of the Pioneers or the Carter Family, The Boys developed a style embracing simple, solid musicianship with rich, four-part harmonies and rounded out with twangy electric guitar riffs and a very memorable performance style. It didn’t take much time to work out five original songs and in late 2015, Country Songs for Sale, The Bootstrap Boys first EP, was released. The Boys hit the ground running, bought a classic Chevy Rockwood RV (affectionately dubbed The Delta Dawn), and started ramblin’ all around the Midwest and beyond.

The Bootstrap Boys have had toes tappin’ and boots stompin’ in places as far flung as Nashville, TN clear up to the tip-top of the country in beautiful Copper Harbor, MI, making friends everywhere they go.

In 2016, ten more original songs were ready for the studio. The Boys recorded their first full length album, titled All Boots Aboard, in December 2016. They were honored to be nominated and win the award for Best Roots/Revival Album of the Year at the WYCE Jammies. In early 2017, The Boys played with the likes of classic purveyor of Juke Joint Swing, Wayne “The Train” Hancock” and Nashville darling Nora Jane Struthers, as well as having the pleasure of opening for another player in the “new outlaw” pantheon, Shooter Jennings. To round out 2017, they were asked to perform at Wheatland Music Festival, a long time bucket-list performance for them, they were lucky enough to play to a packed house (tent) that night. Early in 2018, The Boys recorded and released Live, recorded at Founders Brewing Company in downtown Grand Rapids. Their sophomore studio album, as yet untitled, is forthcoming in 2019.

The Bootstrap Boys are a fully independent band with a special talent for, of course, pulling themselves up by the Bootstraps.

Jon Bassin is a singer and songwriter based out of Pure Michigan and the hills of Appalachia. His music reflects this unique mix of rugged beauty, written from the soul, and taking inspiration from personal experiences in life.

Whether it’s Jon’s acoustic, sentimental solo songs, or the southern, folk-rock, soul-filled music created by Jon Bassin & the Broke Poets – his tunes are an absolute must for any playlist.

Sounds like​: Drinking whiskey-mulled cider by a fire, while being serenaded by The Steel Drivers, John Moreland, Townes Van Zandt, The Drive-By Truckers, & John R. Miller. 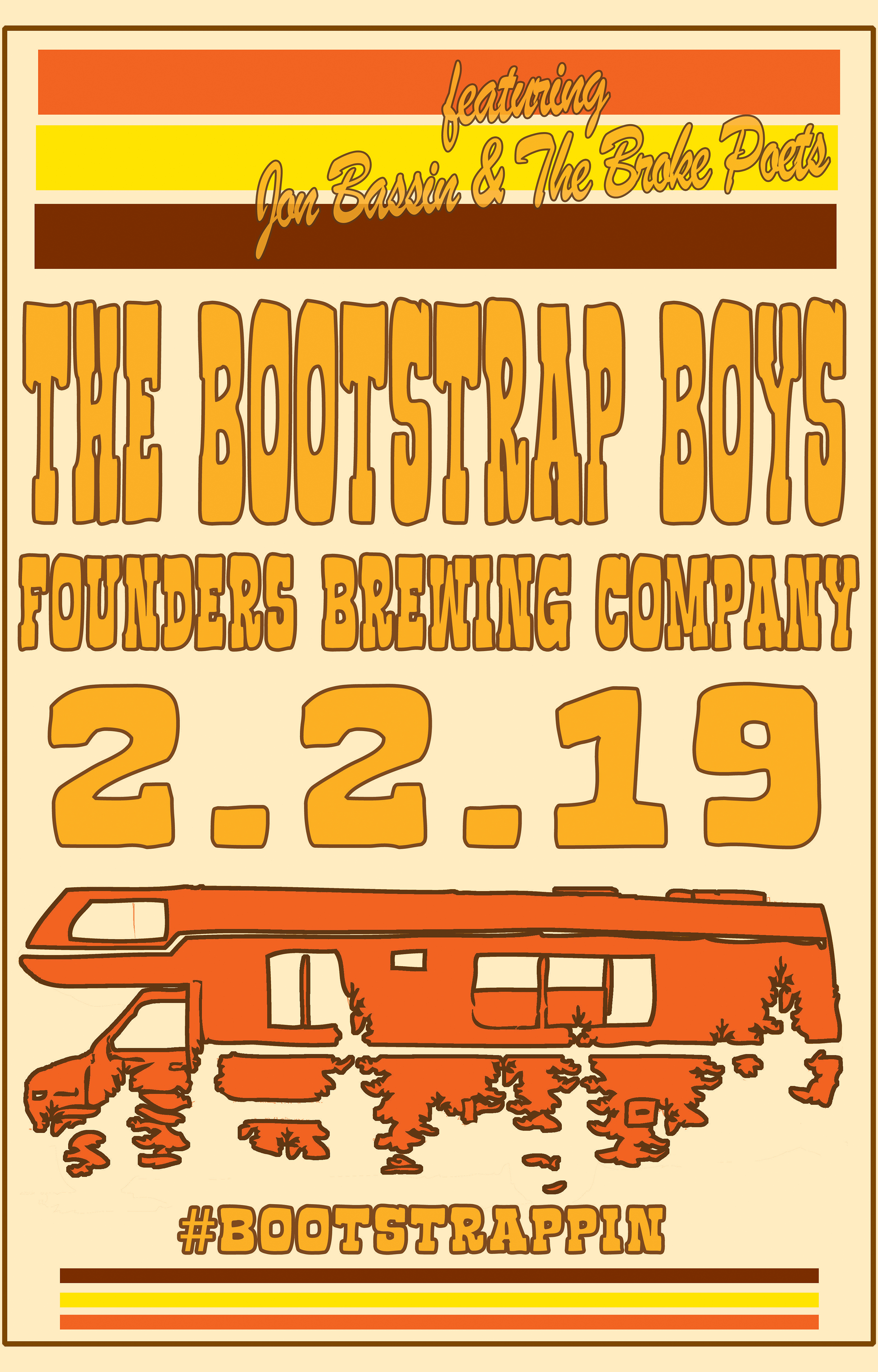