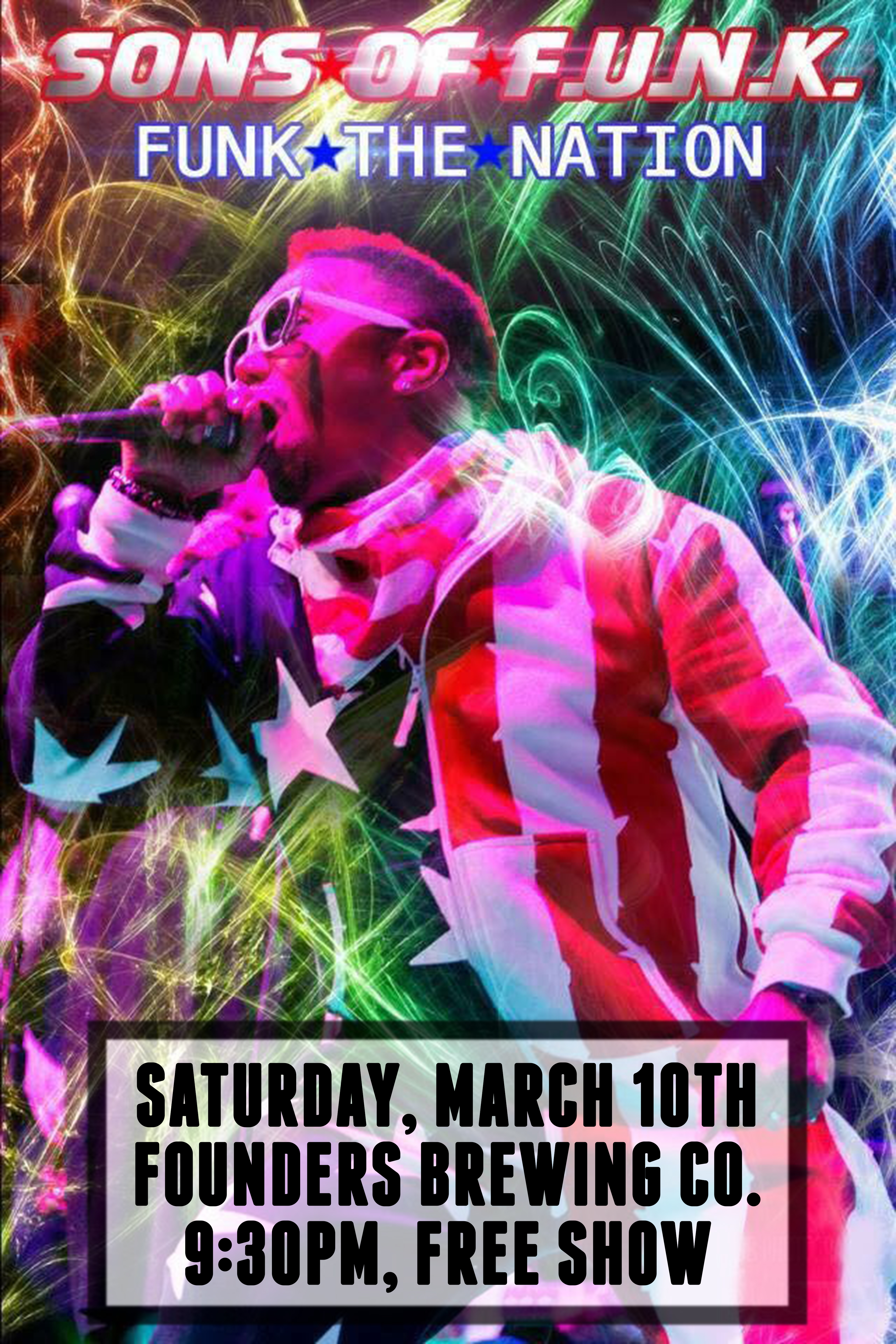 Join us for our KBS Founders Taproom – Grand Rapids Tapping Party where we will pur 2018 KBS for the first time in our taproom. The event is 21+ and starts at 11am with SONS of F.U.N.K tearing up the stage beginning at 9:30pm. This party is FREE.

Ricardo Lewis, (born in Anderson, IN, now residing in Ohio) has been playing drums since a very early age, starting out in the church, and playing with dozens of bands in the gospel, as well as the top 40 circuits in the midwestern U.S. growing up.

He started playing drums with George Clinton and Parliament-Funkadelic/P-Funk All-Stars in 1997, and in 2012 Rico retired from the seminal funk group. Rico has played on six continents with George and P-Funk in his over a decade long tenure, and has played
with a virtual “who’s who” in music today, everyone from Phish to the Red Hot Chili Peppers, to Lenny Kravitz, to Bernie Worrell, Rico has a massive tour book. His credits include Woodstock 99, Montreaux Jazz 04, Nice Jazz 06, Roskilde Fest 06, Fuji Fest 00, and hundreds of others. He has played to millions and millions of people, some festival shows reaching the hundreds of thousands.
He has also appeared with P-Funk televised on the Jerry Lewis telethon, and MTV all over the world.
Rico also played drums and sang as a founding member of the internationally recognized Hip Hop/Funk group Children of Production. The group had one studio offering which sold all over the world, and the group toured the U.S, Europe and Africa, opening up for George Clinton.

This was not Rico’s first foray into hip hop however. He was a founding member of Blacked out Camp, and Children of Production, as well as his own funk/hip hop group Varsity Squad, and many more.
Rico also ran his own We Man Studios in Connecticut from 2005 – 2012, and since moving back to the Midwest and reconnecting with his roots in the Indiana and now Ohio areas, continues to work with his own large stable of Hip Hop and R&B artists from the northeast, midwest, and west coast alike.

Rico founded Sons Of F.U.N.K in January 2012, and plays a vital part of the monstrous Funk Mob. He has played everything from drums to keyboards, with the up and coming funk tribe, as well as his own unique animated vocal work.
Rico Lewis is one of the best drummers in the world, bar none. His talent, and multi-faceted abilities (he does play drums, bass,
guitar, keys, percussion, programming, engineer, rap and sing after all), and has keen ear and eye for other talent is obvious. His
groove is all his own, though often copied, but never truly copped. Rico Lewis has a bouncing, infectious pocket that no other drummer can match.

Rico is currently working on the Sons Of F.U.N.K album “Funk Slap” that proves to be one of the funkiest offerings ever thrust into the general public!