As a performer, Seth is equally at home playing his introspective, socially-charged ballads as he is joining a 10 piece electric ensemble on lead vocals, bass, steel or electric guitar. He can shred with the best of them, but also bring it home with stylish, mellow fingerpicking. His singing is intimate and raw. With his new album, “Eggtones Blues,” Bernard shares the second installment in his Eggtones series, following his 2016 release, “Eggtones for Peace.” Renowned author, environmentalist, journalist, Bill McKibben says of Seth Bernard, “This music not only swings, rocks, and grooves–it matters. It’s the voice of a real community, with a sound and a message the world needs to hear.”

About Friends with the Weather:

Friends with the Weather, a new project from the trio of singer-songwriter/multi-instrumentalists Seth Hendricks, Chris Good, and David Hupp, is a continued exploration of Hendricks and Good’s longtime songwriting partnership of 16 years. While those familiar with their catalogue will recognize familiar lyrical & musical stylings, Friends with the Weather brings a freshness of new material, written in the midst of unique times, creating new sonic textures amidst new collaborations. Local Spins says of the group’s debut, self-titled album: “As expected with a collective of seasoned songwriters and musicians, the album exemplifies a level of excellence; it takes every musical turn you hope it will, but then veers into a direction even more perfect and fitting than what you thought possible.”

Julian Allen is a musical artist, songwriter, drummer, and producer from Chicago, IL. His debut solo  EP, “Could You Be” will be released in early 2017. 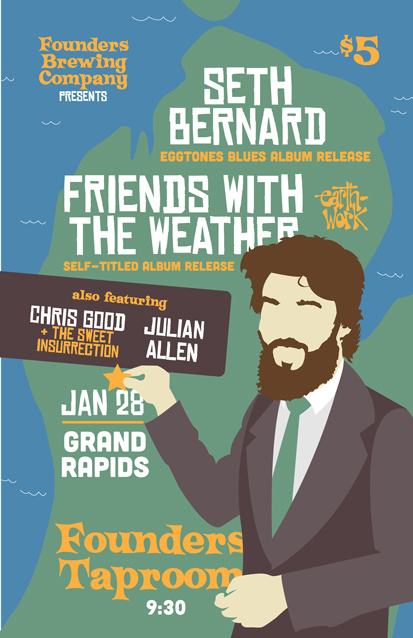