BROWN COUNTY, Ind. — Southern Indiana-bred singer-guitarist Reverend Peyton is the bigger-than-life frontman of Reverend Peyton’s Big Damn Band. He has earned a reputation as both a singularly compelling performer and a persuasive evangelist for the rootsy country blues styles that captured his imagination early in life and inspired him and his band to make pilgrimages to Clarksdale, Mississippi to study under such blues masters as T-Model Ford, Robert Belfour and David “Honeyboy” Edwards.

That passionate inspiration has made Reverend Peyton’s Big Damn Band America’s foremost country blues outfit and fuels the Rev’s new release, The Front Porch Sessions. Peyton’s dazzling guitar mastery is equaled here by his knack for vivid, emotionally impactful songwriting, and his originals are matched in their authenticity by the deeply felt vintage blues tunes that he covers. The album showcases the Rev’s irrepressible personality while echoing the enduring spirit of such acoustic blues icons as Charlie Patton, Blind Willie Johnson, Bukka White and Furry Lewis, whose “When My Baby Left Me” receives a memorable reading.

The Front Porch Sessions will be released March 10, 2017 on Family Owned Records/Thirty Tigers.

“It started as a literal whim on my part, but it turned into something really special,” Reverend Peyton says of this new collection. “I wanted it to feel like you’re on my front porch. You can almost hear the wood creaking.”

The Front Porch Sessions maintains a potent level of intensity throughout, from the upbeat optimism of the album-opener “We Deserve aHappy Ending” to the blunt slice-of-life rural reality of “One More Thing” to the rollicking, playful swagger of “Shakey Shirley,” “One Bad Shoe” and “Cornbread and Butterbeans.”Meanwhile, the instrumentals “It’s All Night Long” and “Flying Squirrels” demonstrate the Rev’s nimble, imaginative guitar work.

“I didn’t have much planned when I went into the studio,” the Reverend notes. “I went into the studio with some new songs and some old songs that I’ve always wanted to try. At first, I thought ‘Well, maybe we’ll make it a download or release a single.’ But it took on a life of its own, and when it was all said and done, I was as proud of it as anything I’ve ever done. To me, it was a lesson in not overthinking things; I just went in and let my gut guide me.

“We recorded this album at a studio called Farm Fresh, which is right down the street from my house,” he continues. “It’s in the shade of the oldest poplar tree in Indiana, and there’s a graveyard next to it and train tracks run across there.  In fact, I think you can hear the train on one track on this record. The studio’s in an old church, and the main sanctuary is the tracking room, so the haunting reverb that you hear is that room.

“We used a lot of vintage gear in the recording. I love that organic sound, and I’m always chasing that in everything I do.  I just like things that feel timeless. Feeling timeless to me is way more important than feeling old. When you try to make something sound old, you’re trying too hard.’

That lifelong pursuit of musical authenticity was instilled in his musical consciousness while Peyton was growing up in rural Indiana, where his early love for blues, ragtime, folk, country and other traditional styles gave him a sense of direction that would soon manifest itself in his own music. He and the Big Damn Band won a large and loyal fan base, thanks to their tireless touring efforts and high-energy showmanship, along with such acclaimed albums as Big Damn Nation, The Gospel Album, The Whole Fam Damnily, The Wages, Between the Ditches, So Delicious and the Charlie Patton tribute disc Peyton on Patton.

Despite his prior achievements, the Rev views The Front Porch Sessions as a personal creative milestone.

“This record’s very personal for me, because so much of it is just me,” he says. “The Big Damn Band is on there, but it’s mostly me. Breezy (Breezy Peyton, washboard) plays washboard on a couple of songs, and Max (Maxwell Senteney, drums) plays a suitcase drum set that we put together in the studio. It’s a snapshot of the week we spent in the studio, but it also represents a lifetime of me building up to it.”

The Front Porch Sessions has also spawned a series of audio-vérité companion videos, many of them shot on the Rev’s actual front porch, that embody the album’s intimacy and immediacy.  “A lot of these songs started on the porch, and that’s what the videos are,” he says. “I’d be pickin’ and go, ‘I like the way this sounds, let me get my camera.’”

Reverend Peyton has already begun to integrate The Front Porch Sessions’ spare approach into the Big Damn Band’s expansive live shows, which are renowned for their intensity and abandon.

“In a lot of our shows in the past few years, we’ll take a break and I’ll come out and do a song or two by myself,” he explains. “That brings things down and allows me to do some songs like this.  We’re definitely gonna be doing more of that, so there’s definitely gonna be moments in the shows where you’re gonna hear a lot of these songs. We may also do some Front Porch Sessions shows, and maybe present some of our other songs in a more stripped-down way. We did one earlier this year as kind of a test, and that worked really well.

“Over the years, our shows have gotten more dynamic,” he continues. “The ups are more up and the downs are more down. That’s something that’s important to me. If I go and see a show and someone’s just standing there and staring at their feet and singing their songs, I feel insulted. That’s not a performance. I want to know that you’re living that song, not just regurgitating it. I don’t think artists should seem like they’re too cool for their audience.”

The Rev’s dedication to delivering the goods on stage is reflected in his flamboyant performance persona. “The Rev is me,” he states. “Sometimes that freaks people out, because the person who’s on stage is exactly the way I am offstage. I don’t know how to separate myself from my music, because it’s so personal to me. My mom calls me Rev; it’s been my nickname since I was a teenager. It was a name that was given to me by some friends, and it sort of stuck.

“I’m one of those people who feels everything really hard, for better or worse,” he continues. “If I’m angry, I’m really angry. If I’m sad, I’m really sad. If I’m happy, I’m really happy. So onstage, I tap into that. There are certain songs that I can’t play on some nights, because they’re just too sad. That may be the rantings of a crazy person, but it’s the God’s honest truth.”

With The Front Porch Sessions showcasing his expanded musical palette, Reverend Peyton is excited about bringing his new music to his fans.

“I really think it’s one of the best things I’ve ever done,” he asserts. “I’m interested in making hand-made American music, and the goal is to be timeless.”

“The latest from Reverend Peyton’s Big Damn Band…. is, in short, a revelation. An amazingly well crafted, controlled explosion of talent, the range and depth of the music performed by the trio is remarkable.” – American Blues Scene

“… the reincarnated Mississippi moan of guys like Son House… a burly soul punishing the senses with a Deltapunk attack and a heavy helping of rural realism. You can’t ignore his Big Damn Band’s gospel.” — Elmore

“The tent revival, almost punk energy of the Big Damn Band is a refreshing splash of coldwater to the face. Between The Ditches doesn’t keep it in the road – it takes up both lanes as it barrels along.” — Living Blues

“The country blues is a gift of 20th century American music, and it’s awesome to see a band tap into its legacy with so much gusto and original vision.” – Music City Roots

“With his wife, Breezy, serving as a one-woman amen corner, and Max laying down the floppy-boot-stomp drums behind Peyton’s spiky, waspish National steel slide guitar on tracks like “Something for Nothing”, the result is a peculiarly infectious blues crusade, touching on themes of money, morality and social responsibility.” – The Independent (UK)

The Reverend Peyton’s Big Damn Band is a twenty-year-old bourbon in a room of vodka Red Bulls and PBRs; vintage yet timeless, exciting and still welcoming…” –MXDWN.COM

“The focal point and ring leader Reverend J. Peyton is the star of the show here flashing a guitar style that elates the ear, at times flying all over the fret board and equally delicately picking with ease.”  – Glide Magazine 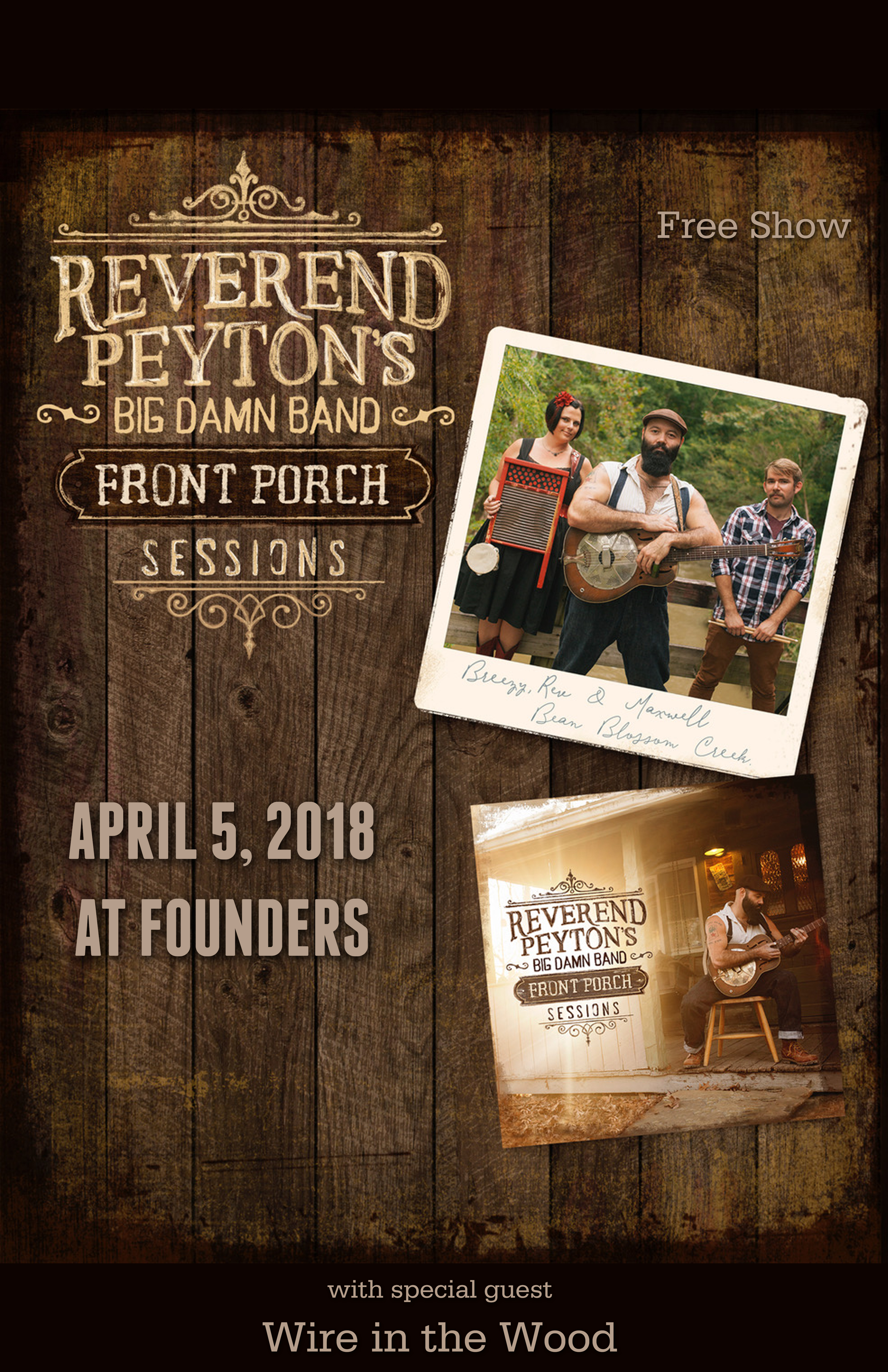