Prolific, influential, cult -hero & indie-folk icon, PALEFACE, is now a high energy and charismatic duo featuring girlfriend, ­Mo Samalot on drums and charming candied vocal harmonies. The pair celebrated the release of their latest album, One Big Party (Ramseur Records), with a special guest ­performance alongside label-mates, The Avett Brothers at Radio City Music Hall, followed by US and Europe tours. Soon after, PASTE Magazine premiered “PALEFACE: The Making Of One Big  Party”, a “documentary short” which follows the band as they record the album and tour. Paleface’s music video for the album’s title-track received airplay through several MTV stations, as well as satellite & online outlets (VHI, CMT, MTV). The duo’s live  Mountain Stage performance aired via 130+ NPR stations nationwide and worldwide via the Voice of America Satellite Service + NPR.com.

PALEFACE, was schooled musically by friend Daniel Johnston and soon discovered at an NYC open mic by Danny Fields (The Stooges, The Ramones, MC5). He’s released over a dozen records including two major label releases, and has been called a major influence and inspiration by a wide range of artists including Grammy Award recipient BECK. Paleface has also collaborated and appeared on three albums by The Avett Brothers. Paleface is also a self taught visual artist who’s been selling hundreds of paintings at his concerts, art shows, festivals and via his website: PalefaceOnline.com. Much of what he’s learned has come from his interaction & observation of great art while living in NYC. Paleface’s main theme is music…He paints string instruments and uses words &  lyrics as if he was painting a song. 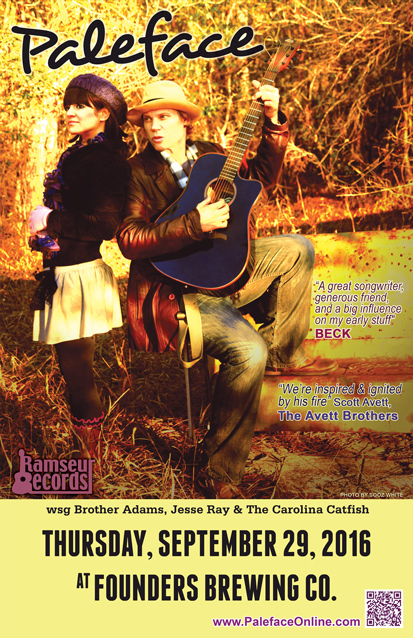