Jack and the Bear (Industrial Pop from Monroe, MI)

About Olivia Mainville & The Aquatic Troupe: “Ethereal and open hearted, singer-songwriter and guitarist Olivia Mainville and her band The Aquatic Troupe, based in Grand Rapids, are full of surprises. Their uptempo gypsy swing and baroque pop songs accented with punchy horns showcase a vaudeville flair, while gentler compositions soar into spacier landscapes, paring back the band’s tendency towards rich sonic layers to reveal Mainville’s inspired vocals. Musicians like Beirut, Danny Elfman, and David Bowie have been a major influence, and Bowie’s guitar player and bandleader Gerry Leonard even played on their 2015 debut album, Maybe The Saddest Thing. Olivia Mainville and the Aquatic Troupe have made a truly distinctive and unforgettable live show and sound for themselves.”

About Jack & The Bear:

Jack and the Bear is an “Industrial Pop” band from lower east Michigan; conjured up of three siblings and close friends, the group’s sound can be related to that of Tom Waits, Felice Brothers, C.W. Stoneking, Bruce Springsteen, Randy Newman, and Disney Soundtracks. With a slogan stating themselves as “The greatest thing you’ll ever see, probably.” they’re a group you won’t wanna miss.

Throughout their time as a self-managed (DIY) band, “Jack” have performed at noteworthy music festivals (Bristol Rhythm and Roots, The Frendly Gathering, Nashville PAW Fest…etc), recorded with Grammy award winning artists, engineers and producers (Oz fritz, Doug Sax, Mooka Rennick, Sam Bardfeld), had multiple works placed and aired on hit Viacom network programs such as MTV’s Catfish & Teen Mom, formed their own recording studio niche in their hometown of Monroe, MI and have enjoyed the past few years touring extensively across the U.S. anywhere they can to spread the word of “Jack” referring to themselves as “The greatest thing you’ll ever see, probably.”

A long time ago, at the dawn of the Atomic Age, a succession of no-good punks and ill-mannered teenagers took the best of American roots music — hard-partying honky tonk country, searing gutbucket blues and lonesome hillbilly twang — and distilled it into a potent moonshine known as rockabilly. This combustible formula, passed down through the generations, forms the heart of the revved-up stylings of Delilah DeWylde.

Mixing their own self-penned songs with vintage country/honky tonk hits, rockabilly favorites, and surf gems by such artists as Hank Williams Sr., Johnny Cash, Wanda Jackson, Buck Owens, Gene Vincent, and Dick Dale, Delilah and the Lost Boys come out on stage looking and sounding like a step back in time. Dressed to the nines in the tradition of pre-color television, the band thrilled audiences across the Midwest with its spirited performances. 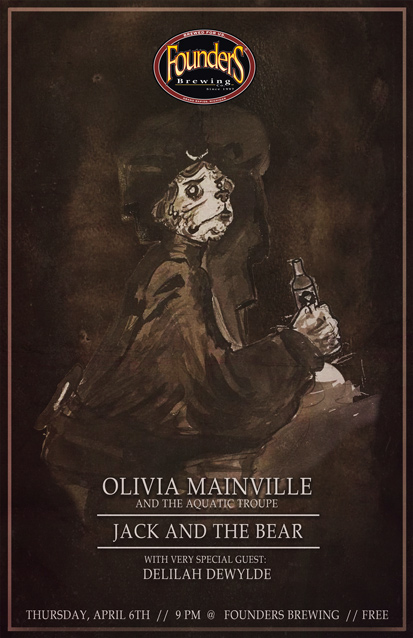