Naughty Professor is an iconoclastic New Orleans-based jazz-funk sextet whose adventurous recordings and horn-charged, high-energy live performances have earned them an enthusiastic fan base, critical acclaim, and widespread attention from their musical peers.

Their diligent roadwork has established Naughty Professor as a beloved live act. Weaving together complex, inventive compositions and loose, organic improvisation, the band honors their hometown’s jazz, R&B and brass-band traditions while looking to the future.

Naughty Professor raises the stakes on its new album Identity (Release date June 23, 2017). Where their prior four releases showcased the group’s knack for self-contained instrumental experimentation, Identity finds the band teaming with a stellar assortment of more than a dozen cutting-edge collaborators, whose vocal, instrumental and compositional contributions expand the music into new musical territory.

“They’re not just guests,” explains Naughty Professor drummer Sam Shahin. “The collaborators on this album were chosen because we respected what they do and felt that they could be a complement to our ensemble.”

“When these kids first started coming up on the scene, I could tell right away that there was something very special about their energy and music,” David Shaw comments on his excitement to collaborate with Naughty Professor. “I believe that the sky has no limit for these boys.”

“My first impression of Naughty Professor was one of amazement,” Chali 2na notes. “New Orleans is full of musicians that are masters of their craft, and Naughty P is no exception. They are also perfectionists and students of the game. This is immediately apparent once you hear them play.

“I am loving the resurgence of jazz combined with this youthful mindstate that musicians have today,” Chali continues,” and Naughty Professor is pushing that envelope.”

The band recorded each track on Identity live in the studio, heightening the immediacy of the performances and solidifying the band’s connection with the guest collaborators. The sessions were also documented on video, with an eye towards releasing a video version of the album.

A wide range of musical impulses has driven Naughty Professor ever since the band members first convened in 2010, having met while students at Loyola University’s jazz program. The musicians’ potent collective chemistry quickly won attention on the New Orleans music scene. After graduating, they began touring, expanding their audience nationwide.

Naughty Professor’s first three albums—2013’s Until the Next Time, 2015’s Out On A Limb and 2016’s live In the Flesh—further raised the band’s national profile. Lauded by critics for having a musical “depth and vision far beyond their young years,” Naughty Professor’s name regularly appears alongside New Orleans’ veteran luminaries. In 2013, the band was nominated by Gambit’ Weekly’s Big Easy Music Awards for “Best Emerging Artist,” and for “Best Funk Band” every year since. Naughty Professor was also nomintated in 2015 and 2016 by Offbeat Magazine’s Best of the Beat Awards for “Best R&B/Funk Artist.” In the magazine’s most recent poll, bassist Noah Young and Drummer Sam Shahin were named finialists as the “Best at their Instruments,” furthering the band’s stellar musical reputation.

Identity continues Naughty Professor’s unyielding exploration of their home city’s eclectic musical landscape. “New Orleans is the reason that we were all able to come together, and it’s the reason we’ve been able to continue making music together,” says alto and baritone saxophonist Nick Ellman. “We all were drawn to the city, and we all have a tremendous respect for the history of the music culture in New Orleans. In no way are we a traditional New Orleans band, and this is not a traditional New Orleans record, but New Orleans’ musical and cultural traditions have everything to do with how we make music.”

New Orleans’ vital spirit is present throughout Identity, which combines artfully-crafted studio creations with material developed through live performance. “We like being adventurous and cerebral, but fun is also important,” Shahin concludes. “We operate with a jazz mentality, but we like verse/chorus structures. We definitely embrance the idea that we’re bridging the gap between the more thought-provoking side of jazz and popular mainstream music, and making the whole thing fun and accessible.”

The result is Identity, Naughty Professor’s most potent and ambitious musical statement to date. It is a record that, by collecting together diverse and disparate musical voices into a seamless whole, simultaneously honors the past and pushes into the future. 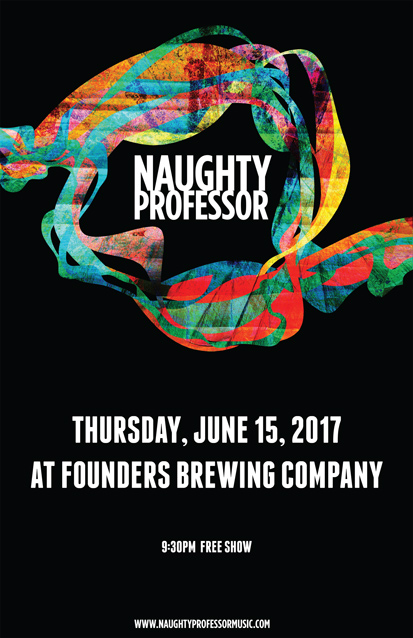