The Swedish hiphop/swing band Movits! are making their way through the music world, aiming for the top of the charts. A place they’ve already visited once with their ’08 debut “Äppelknyckarjazz”. After appearing on the American talk show “the Colbert Report” the album climbed to number one spots on both iTunes and Amazon charts. Notable here is that these were American charts and Movits! are singing in Swedish, a language quite far from the lingua franca of the US.

They have indeed come far since the days spent in the family house in Luleå. There, in the most northern part of Sweden, Johan and Anders, brothers and band mates, began developing what would later become Movits!.

“In those days we were more into acoustic hiphop and reggae” Anders says. “It was just acoustic guitar, organ and cajun.”

They released an EP under the name Planeten Jorden (Planet Earth) called “Frihetssånger i Retro Adidas” (Freedomsongs in Retro Adidas).

The brothers don’t seem to have any problems working together as they have fairly marked out roles to play. Johan, the lead singer, is the lyrics author and chorus builder, while Anders, the DJ, is the producer.

“We’ve always been on the same track when it comes to music” Johan says. “And it’s an advantage to work with your brother. If things slow down we can always stage a Gallagher-fight, to fan the media”

The duo turned trio when the Rensfeldt-brothers were joined by saxophone player Joakim Nilsson and together they took Frihetssånger i Retroadidas on a summerfestival tour in 2005. It was at an after-party to one of these festivals they discovered the swing.

“It was like a three-way, simultaneous revelation” Joakim remembers. “We were out dancing in a backyard, when someone put on Benny Goodman’s “Sing, Sing, Sing”. The three of us were totally blown away!”

After that, their music took a new direction. Inspired by the drums and the horns of the swing era, they started working on the music that would later be known as Äppelknyckarjazz (Applestealingjazz, named after the apple-stealing trousers worn by Swedish street kids in the ’30s and ’40s). Using a dozen different musicians they recorded the album, a process that took more than three years.

In the midst of all this, the band decided to change their name.

“We felt that Planeten Jorden didn’t really represent the new direction our music had taken” Johan explains. The choice fell on Movits, after the Swedish 18th century musician Father Movitz, sung about by the national musical hero Carl Michael Bellman. The name especially highlights the influence of old Swedish songlyrics in Johan’s writing. With a new name and new music, Movits! were on their way to produce their first full-length album.

If the first single of the record, “Swing för Hyresgästföreningen” went by fairly unnoticed, the second made a bigger impact. With a 13:th place on Sweden’s Tracks-listan and frequent airtime on P3 (channel 3 on Sweden’s national radio) it’s safe to say that “Äppelknyckarjazz” is Movits!’ breakthrough single. It was released in May 2008 and after that things really started to happen.

After releasing their debut November 2008, they started to play bigger venues in Scandinavia. With gigs every weekend for months, the name Movits! was getting more and more recognized. It still came as a big surprise to the band when they were contacted by the staff at the Colbert Report.
“We really didn’t think we’d ever play outside of Scandinavia, being as we sing in Swedish”, Joakim says. “And definitely not in the States!”
Stephen Colbert had found the video to the single “Fel del av Gården” on a forum and despite the linguistic difference, he decided to invite Movits! to perform on his show. On July 27 they played on the Colbert Report and the rest is modern hiphop history.

Following up on their success in USA, Movits! embarked on a nation wide tour in January 2010. They were accompanied by fellow Swedish rapper Zacke and a filming crew, documenting every step they took. With sold out dates in all big cities, the “First we take Manhattan Tour” marked the start of a buisy year for Movits!

During the spring and summer of 2010 Movits! have been expanding their reach in Europe. The have toured England, including playing at the Glastonbury Festival seven times, and played festivals in Hungary, Germany, Austria, Switzerland, Slovakia, Macedonia and Shanghai. They have also appeared on national television in Sweden and perform on BBC Radio 1 sessions in London.
During the fall they have been recording their second album, which will be released worldwide during the first quarter of 2011. It’s safe to say Movits! are on their way up. And if things slow down, there’s always the Gallagher-card to play. 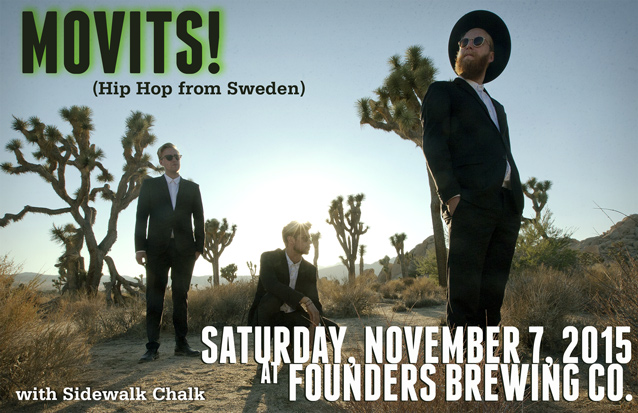