Mike Adams at His Honest Weight (Loungey Indie Folk Rock from Bloomington, IN)

Mike Adams At His Honest Weight is the flagship recording project of Mike Adams (duh). Musician, writer, TV host, parent, humorist, friend, nimble agitator, these are all adjectives that describe Mike Adams, the man. But, in another realm, he’s a complex mixture of Star-stuff, somehow equally at home whether he’s at home, or performing for a captivated drooling audience.

For the most part, these songs are written and recorded by Mike, alone, in his room before they’re handed off to friend and trusted confidant, Adam Jessup, for further production and polishing-off. I suppose Mike sees the arranging and writing process as an escape fantasy into his own mind where he’s safe and in control. Of course, he’s wrong about that. What he’s really doing is flipping himself inside out; internalizing his experience and exposing his veiled vulnerability in a grotesque public evolutionary process for the whole world to see. Obviously. But, he’s a sensitive guy, so if you don’t tell him, neither will we. 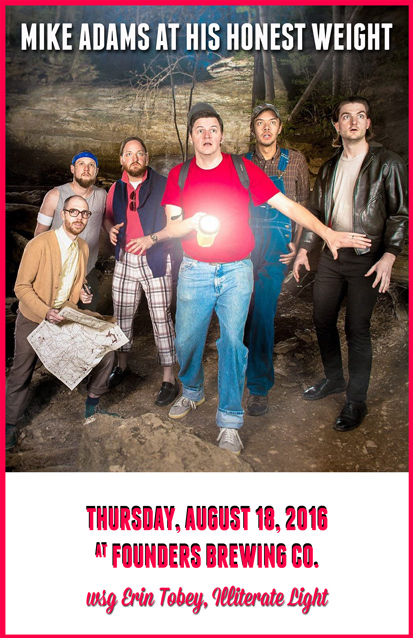