There are no advance tickets for this engagement. Just $5 cover at the door, day-of-show only.

Until last September, things were relatively quiet in Meat Puppets 2016 world. Then Riotfest popped up on their schedule. There are not too many “firsts” left for the Puppets to experience, but out of the blue, Curt was invited to meet with 1st, 2nd, and 3rd graders (!!) at Suder Montessori Magnet School in Chicago.

“I have put forth the idea that Curt Kirkwood is the coolest person that walks
the earth and my kids have bought in…showing up will confirm it all.”

When the kids dropped a video along with the invite, https://splice.gopro.com/v?id=YpQbL5q1L, that did it, and the band got to cut loose with the kids singing along.

Following that outing, the band has started to revisit the folk and singer-song writer nuggets Curt put out in 2005 on his solo masterpiece, Snow, as well as similarly veined tracks from Rat Farm (“Sometimes Blue”). 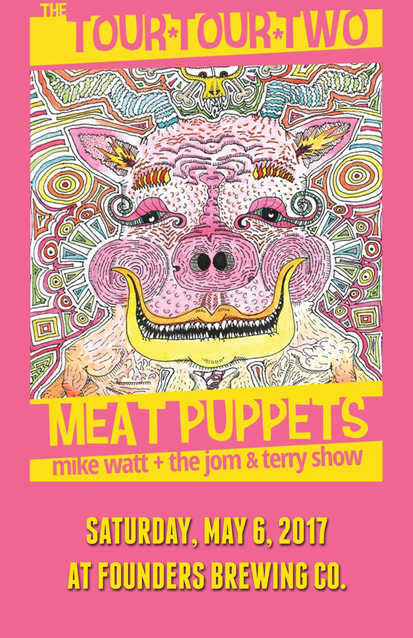