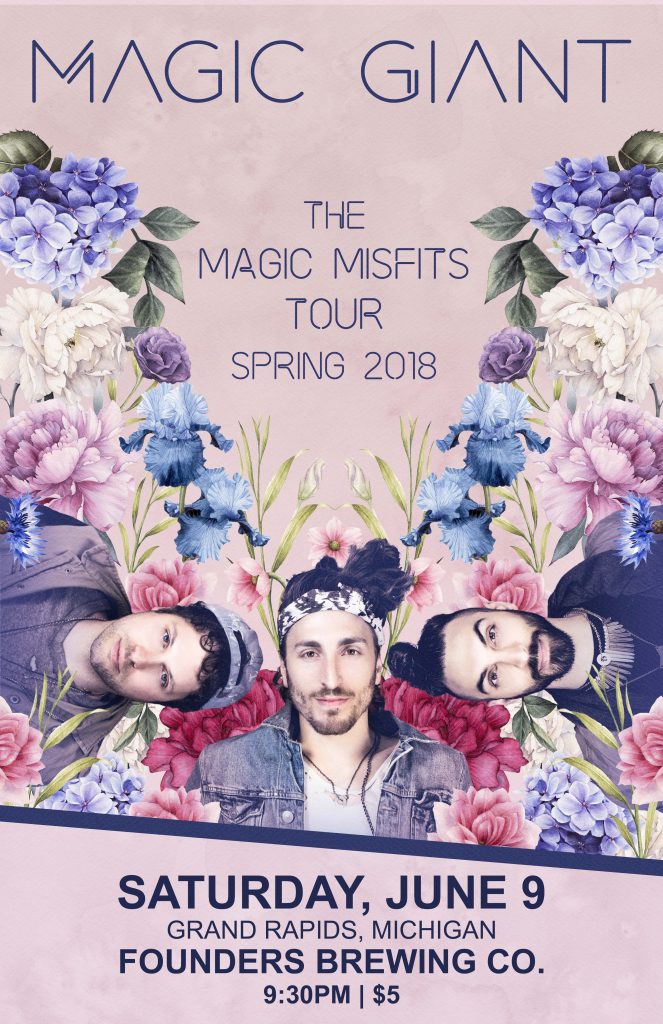 Inside a Redwood tree off the coast of California; within a tunnel by Snoqualmie Pass; on an airstrip in Marble, Colorado; in a wild daisy field near Crested Butte—these are just a few of the places Los Angeles trio, Magic Giant, recorded its debut album, aptly titled, In the Wind (Washington Square/Razor & Tie). Austin Bisnow (lead vocals), Zambricki Li (banjo, violin, harmonica), and Zang (acoustic guitar, cello) welcomed nature into the fold as their unofficial fourth member.

“It was fate,” recalls Zambricki. “We were scheduled to play all these festivals—Electric Forest, Wanderlust, Lightning in a Bottle—that just so happened to be in really beautiful parts of the country.” During Spring 2016, the boys bought a shuttle bus, converted it into a solar­powered mobile recording studio, added a California King on hydraulics, and fondly named her Queen Elizabeth. “There were spaces of time between shows where we could get creative,” explains Zang. “Using the bus to power microphones, we recorded outside—literally In The Wind—across North America.”

“Living in the city, it’s easy to forget how enchanting the road can be,” Zang adds. “We recorded anywhere and everywhere. There were no ceilings or limits to what we could capture.”

Just before Magic Giant hit the road, their single “Set on Fire” began heating up. Independently released, it went from their studio to #4 on Spotify’s US Viral 50, landing the three­piece a deal with Washington Square. Climbing into the top 25 on Billboard’s US Alternative chart, Rolling Stone named Magic Giant one of 10 artists to watch and called “Set on Fire” the “perfect music festival fare.”

After performing the song on the Today Show as Elvis Duran’s Artist of the Month, Kathie Lee Gifford exclaimed, “What a unique sound—oh my gosh!” It became a favorite on Los Angeles radio, with the single hitting #1 on KROQ’s Locals Only, and the band becoming ALT 98.7’s Artist in Residence. Billboardclaimed, “With a joyful live show the band is inspiring mass dance­alongs,” while NPR wrote, “Magic Giant captures the energy and spirit of the past few waves of upbeat, passionate indie­folk.”

Magic Giant represents the union of three distinct, dynamic, and diverse artistic voices. Since his childhood in Washington, D.C., Austin obsessively pursued his love of songwriting. He studied classical composition and then went on to write songs with artists ranging from John Legend to David Guetta. New Jersey native Zambricki got hit by a car in junior high, fell into a coma, and once he woke, miraculously learned violin in 4 days through a rare brain trauma reorganization now known as Acquired Savant Syndrome: “If I could go back, I’d throw myself in front of the car,” Zambricki chuckles. Later on he began writing and one of his first songs was featured in the Sundance­awarded film Paper Heart. Born and raised in Los Angeles to Persian immigrants, Zang learned upright bass in grade school before picking up guitar and studying dance. He caught the attention of Austin and Zambricki when they came across online videos of him salsa dancing and were instantly hooked.

The three are an unlikely match, but their magnetic chemistry can get any crowd moving, from a sold out show at the legendary Troubadour to a sunset music or yoga festival audience. The group has recently toured with bands such as The Revivalists, Atlas Genius, Beats Antique and Mike Posner.

“We use whatever instruments are best for the song,” says Austin. “Lyrically, when we get together to write,” adds Zang, “it’s different from what we would have imagined individually. That’s the beauty of co­writing—we become one unique voice we may never have found on our own.”

The road eventually took the band to Atlanta, where they met up with producer Ben Allen to help glue the body of work together. Returning home to their converted 1940’s bomb­shelter studio, The Bunker, Magic Giant put the finishing touches on their debut record. Austin leaves us with, “When people hear our music or experience a show, we want to bring out the most uninhibited version of themselves.”

Getting there is half the fun, as the old saying goes, but the journey is really the whole point for Boston electrofolk duo Tall Heights. Singer/guitarist Tim Harrington and singer/cellist Paul Wright know where they’ve been, and where they want to go. As for the route, well, “we’re just mapping it out as we take it, day by day,” says Harrington.

They’ve reached their biggest junction so far — Neptune, out now, is Tall Heights’ first album for Sony Music Masterworks, and the latest step in the ongoing evolution of their sound and style.

Harrington and Wright formed Tall Heights in 2010, keeping their songs stripped down to their essential elements, in part, to make it simpler to perform on the streets of Boston.

Neptune is a far lusher construct: along with pristine and emotive vocal harmonies, there’s subtly chugging electric guitar and a spare descending bassline on “Iron in the Fire,” ethereal synthesizers and a spacious drum part on “Spirit Cold,” a brittle splash of percussion to open “Backwards and Forwards” and feedback created by two cellphones on “Cross My Mind.”

“It was helpful and I think comforting to define ourselves as two vocalists, guitar and cello,” Wright says. “There was a beauty and a simplicity, and stepping outside of that box is pretty scary, because you’re forced to redefine yourself and do some sonic soul-searching. I think this record reflects the results of that scary step.”

The band’s broadening sound came from the musicians’ conscious effort to push themselves, and each other, to create in new ways. By relying on a few core elements at the start, the duo learned to make the most of their minimalist set-up. “It taught us to be lean and mean and effective with just two voices and two instruments,” Harrington says. “It made us consider vocal tone and the way voices can mesh and interact.”

As those lessons took root, the pair essentially gave themselves permission to push their musical boundaries outward over three separate recording sessions at Color Study studio in tiny Goshen, Vermont, that yielded songs for their 2015 EP Holding On, Holding Out, and for Neptune. Not only did Harrington and Wright expand their sonic palette throughout the process, they also altered their approach to writing. The musicians tend to develop ideas separately, before one brings a new song to the other for further development. It’s a reflection of their early days sharing musical ideas, when Wright was living overseas and Harrington was finishing up college.

“We would send each other terrible sound-recorder voice memo files and we’d write these nice emails to each other about each other’s songs, so creating concepts independently is something we’ve always done,” says Wright, who has been friends with Harrington since they were kids growing up in the central Massachusetts town of Sturbridge.

They changed the formula on Neptune. Four songs on the album — “River Wider,” “Infrared,” “Cross My Mind” and “Growing” — are the result of one musician looping a simple instrumental part and letting the other write lyrics for it. With the last recording session looming, the duo worked faster than usual on those songs, particularly the somber, atmospheric “Cross My Mind.” “We were under the gun, he was downstairs making one thing, I was upstairs making another thing, we put them together and then we workshopped it in the car on the drive up to the studio,” says Harrington, whose Boston apartment is literally upstairs from Wright’s.

Their ever-closer collaboration, and the time they gave themselves in the studio to develop it, is indicative of the band’s developing approach to making music. “I can hear the evolution happening,” Harrington says. “I feel like we’re walking across a bridge from one place to another, and maybe I’ll always feel that way, but I’m really happy with how we’re moving.” 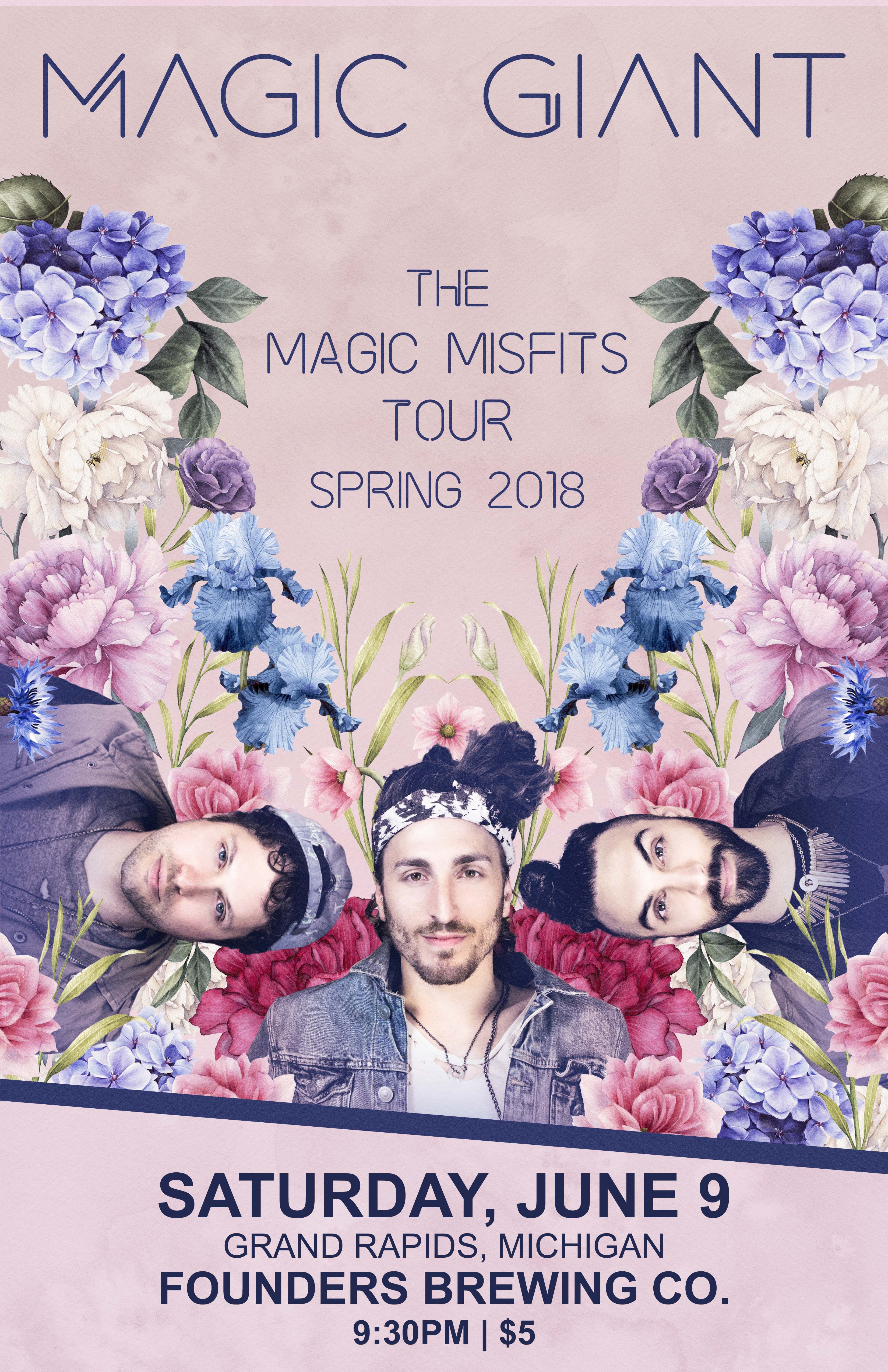