The Lowdown Brass Band, hailing from Chicago, is a horn-driven tour de force. From street beat to metal, the LDB showcases their unique high-energy style on their latest release “Lowdown Sounds,” which includes their version of Roy Ayers’ R&B classic “Everybody Loves the Sunshine,” featuring the soul legend himself on vocals and vibraphone.

“A beautiful rendition of this classic, this version will take you from Chicagoʼs harsh winters to the warm beach at 57th Street mid-summer. Itʼs a blast from the past and has the band in full summer swing, Roy crooning like the old days never left.” -Fleamarket Funk

The LDB breaks the barrier between audience and performer with their live show, which features dynamic vocalists, hip-hop MCs, and body movement that gets any wallflower up and on their feet. The Lowdown Brass Band has performed at some of the premier venues and festivals in Chicago, throughout the United States, and across the globe, including: The Metro, Double Door, Lincoln Hall, Schuba’s, House of Blues, Cubby Bear, The Promontory, Hideout, Andyʼs Jazz Club, Cliff Bell’s, Taste of Chicago, Wakarusa, Meijer Gardens, and the Cotai Jazz and Blues Festival. The LDB has had the pleasure of sharing the stage with such artists as: Lake Street Dive, G Love and the Special Sauce, Dumpstaphunk, The Stooges Brass Band, Ricky B, Wycliffe Gordon, Bonerama, JC Brooks & the Uptown Sound, The O’ Myʼs, and The Drastics.

“Not exactly Slipknot, but not exactly John Philip Sousa either. What it is, exactly, is AWESOME!” – Chicago Sun Times 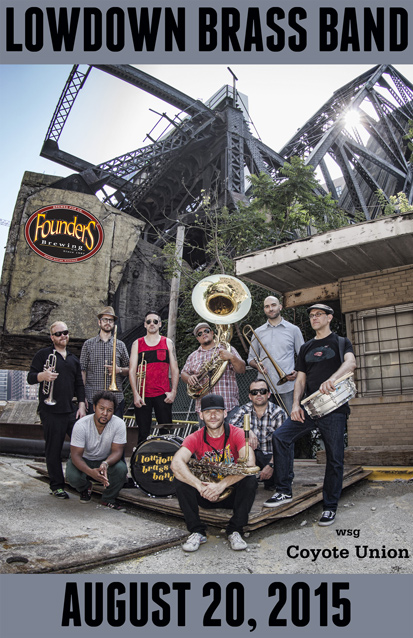