For the recording of their sophomore album Gold Fever, San Diego-based dirty-blues
twosome Little Hurricane skipped the studio and rented out a 19th-century apple-packing
house in an old gold mining town. For two weeks, singer/guitarist Tone Catalano and
drummer/vocalist C.C. Spina hunkered down with vintage equipment borrowed from a
friend who once recorded with legendary bands like the Grateful Dead and Deep Purple.
Sweating through a mid-summer heat wave in their air-conditioner-free surroundings—
and often visited by tarantulas, turkeys, deer, and other local creatures—Little Hurricane
quickly found their new album taking on a swampy yet ethereal vibe that slyly captures
the spirit of the weirder, wilder corners of Southern California. 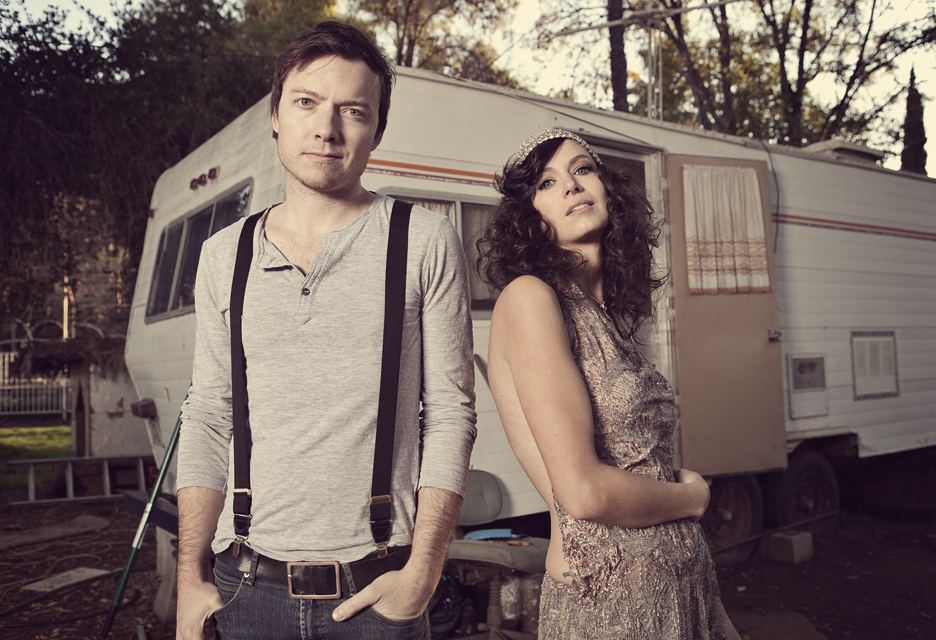 The follow-up to Homewrecker (the debut album Little Hurricane self-released in 2011),
Gold Fever busts open its predecessor’s rootsy blues-rock with an Americana-influenced
sense of storytelling, a disarming ease with breezy melody, and a broader sonic palette. At
turns stark and lushly textured, the album draws much inspiration from Tone and C.C.’s
frequent getaways to the desert and their shared love of Salvation Mountain, the Salton
Sea, and “all those places where kooky people go to escape the rest of the world,”
according to C.C. Also essential to Gold Fever’s sonics were the acoustics of the recording
space itself—located in Julian, California, the house was built from foot-and-a-half-thick
stone and crammed with thousands of books left behind by its author-owners—as well as
Little Hurricane’s use of analog equipment. “It’s the same equipment that made those
bands sound so good back in the ‘60s and ‘70s, and it really helps to balance out the
digital edge from the more modern technology we’re sometimes using,” notes Tone, a
longtime audiophile who served as producer on Gold Fever.
Formed in 2010 and fast recognized as a killer live act, Little Hurricane devoted two years
to the creation of Gold Fever. “Homewrecker was recorded literally while touring, in kitchens
and living rooms all over the place, so for this one we wanted to take more time and see
what happened,” says C.C. While the album has a heart-on-sleeve honesty that’s deeply
intimate, Gold Fever also delivers a slew of songs huge in sound and scope. “Playing big
festivals over the past couple years and getting on those bigger stages motivated us to
write bigger songs,” she points out.
Little Hurricane builds off their dirty-blues dynamic for nearly every track on Gold Fever,
but infuses each song with such unexpected and inspired touches as the ghosty effects and
one-drop rhythm of “Summer Air,” the swell of strings on the otherwise frenetic “Sorry
Son” (a gut-punching number about C.C.’s brother and his struggle with addiction,
written from her parents’ perspective), the horn-soaked soul of “Boiling Water,” the
snakey groove of “No Man’s Land” (whose opening lyrics put a playful twist on the Eric
Carmen power ballad “All By Myself ”), and the handclap-backed strut and growl of
“Grand Canyon.” Throughout Gold Fever, C.C.’s drumming shifts from thundering and
frantic to crisp and razor-sharp, while Tone’s guitar work encompasses lead-heavy riffs,
bluegrass-style twang, and gorgeously understated soloing. And although Tone serves as
Little Hurricane’s main vocalist, C.C. lends her honeyed yet earthy vocals to songs like the
spooky, swaying “Breathe,” the sultry stomper of a title track, and the slow-burning but
anthemic lead single “Sheep in Wolves.”
Each of the songs on Gold Fever was sparked from close collaboration between Tone and
C.C., who first found each other through a Craigslist ad. Originally from Chicago, C.C.
started playing drums when she was just ten-years-old (“My dad brought me home the
Iron Butterfly album with ‘In-A-Gadda-Da-Vida,’ and that had a big impact on me
wanting to be a drummer,” she says). Attending culinary school after high school (and
interning at the House of Blues Chicago’s Foundation Room, where her love of blues was
born), she moved to San Diego and bought herself a drum kit to get back to playing
music.
Born in Santa Cruz and raised on Van Morrison by his “East Coast hippie” parents, Tone
picked up guitar in seventh grade and played in a post-punk band in high school and
college. Though he’d kept up with guitar over the years, Tone’s career was focused on his
work in audio engineering, with an expertise in live recordings that led him to work with
artists from Gwen Stefani to Led Zeppelin’s John Paul Jones. “Working as an engineer, I
started to see that a lot of bands were using playback tracks in their live performance,” he
says. “It bothered me that so few people were just playing music, so I started to look for a
drummer to make music of our own.”
That commitment to organic, unadorned sound is evident in the Little Hurricane’s live
experience, which has graced major festivals like Lollapalooza and Austin City Limits in
recent years. “Live is what we’re really all about, and we try to put on as big a show we
can for everyone,” says C.C. The stripped-down but amped-up two-piece dynamic also
goes a long way in maintaining Little Hurricane’s beautifully brutal energy, even on the
more intricate and melody-soaked arrangements heard throughout Gold Fever. “One of
the most important things for us on this album was making sure we never strayed too far
from just good, straight-up rock-and-roll recording,” Tone says. “We try to keep it raw
and honest, and with the two of us that’s not so hard.” 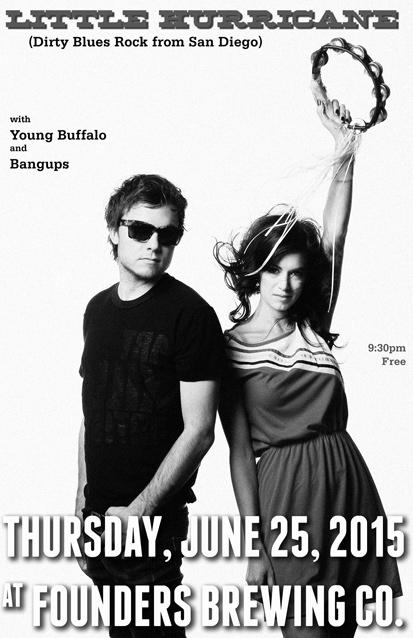