Joe Hertler & The Rainbow Seekers (Ultra-catchy, yet nearly impossible to define, from Lansing)

Joe Hertler & The Rainbow Seekers will make a sprightly young groove doctor out of anyone. With spectacular energy pulsating from every member of the band, the Rainbow Seekers could illuminate the very chambers of Heaven. Lead singer and Amish excommunicate Joe Hertler splashes through lyrical puddles of golden rain, leaving his audience wearing flowery headdresses and bubbling smiles. A ride on the Rainbow will take you across the mountains of Motown, through the fjords of folk, over the archipelagos of Americana, and—at last—into a funky firth, where only the fiercest of friendships can be found.

The Rainbow Seekers began their quest beneath the fingertips of songwriter Joe Hertler. Bassist and producer Kevin Pritchard, recently thawed from an extremely rare prehistoric groove glacier, discovered the forlorn Hertler in a twinkling, mysteriously fortuitous place called The Quilted Attic. Alongside legendary glacier-hunter Rick Hale—who would later spend decades forging a drumset from pure, white-hot, ancient stardust to mark the occasion—Pritchard changed the world: He wrangled Hertler into musical collaboration. And the lonely little songsmith, it turned out, was not quite as alone as he seemed: With him came the irresistibly sexy blues guitar prodigy who is now known to the world as Ryan Hoger.

The core of the Rainbow was thereby established, and it didn’t take long for the Rainbow Seekers to continue their expansion. Multi-instrumentalist and notable auxiliary percussion maestro Micah Bracken journeyed from the bowels of Atlantis when he heard tell of the Rainbow, and the earth trembled as saxophonist and all-around bad ass Aaron Stinson descended from Olympus on a golden rainbow of his own. Then came Stinson’s little-known winged companion from the Far East, the debonair violist Joshua Barber Holcomb—When he saw the pure, unadulterated joy the Rainbow Seekers sprinkled on every crowd they happened upon, he had no choice but to join them on their quest.

As you’ll know if you’ve seen the band, seeking the proverbial Rainbow is all about the live performance. “The live show is the purpose of the band. This is why we make music. Playing music is a symbiotic process, and without a crowd it is just a bunch of guys jamming,” says Hertler. “We believe that performance is not a High Art operation, and that you should do anything you can to ensure that the crowd is having a good time. From piñatas to confetti, to fog, to flowers, to drum solos, to strobe lights, to Thor, to sword battles—literally anything goes.” 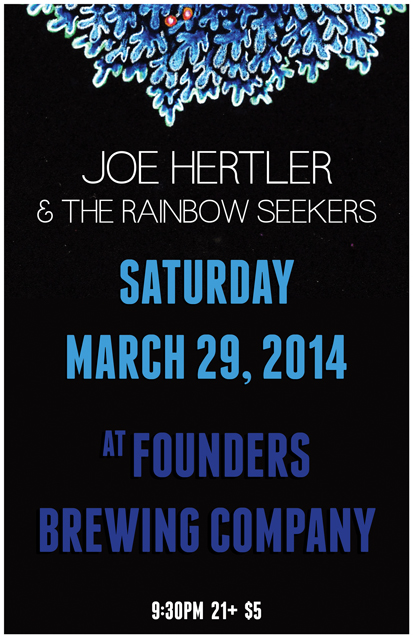