The Jim Shaneberger Band is a group of hardworking musicians hailing from West Michigan. Led by front man Jim Shaneberger, a skilled guitarist, bassist, songwriter, and vocalist, the band is a mainstay in the Michigan music scene. Bassist Jeffrey Baldus and drummer Steve Harris each add their own energy and playing styles for a lively, energetic, and eventful stage performance. With influences like Jimi Hendrix, Stevie Ray Vaughan, Led Zepplin, and Motown classics, the Jim Shaneberger Band mixes rock, funk, soul, and blues into a sound all their own.

Jim Shaneberger’s songwriting prowess made its debut on the band’s first album, Work In Progress. His original music showcases his diverse range of musical interests, with each song drawing from a unique genre and theme. “Trouble,” an R&B flavored song with socially conscious lyrics, has had radio play all over the world, creating a fan base for Jim Shaneberger Band reaching far beyond their Grand Rapids roots.

The Jim Shaneberger Band’s ability to perform captivating original music, as well as covers that have their own take and style, has led them to many high profile gigs, including opening for funk band Here Come the Mummies in 2014 and 2015, and competing in the International Blues Challenge in 2015 in Memphis, Tennessee. Along with that, Work In Progress was nominated for four WYCE Jammie Awards in 2014, including Best Album by a New Artist, Best Blues/Soul Album, Album of the Year, and Song of the Year for “The Storm is Coming.” With the release of their new album, Above & Below, this band is no longer a “work in progress,” but a growing force in the music scene. 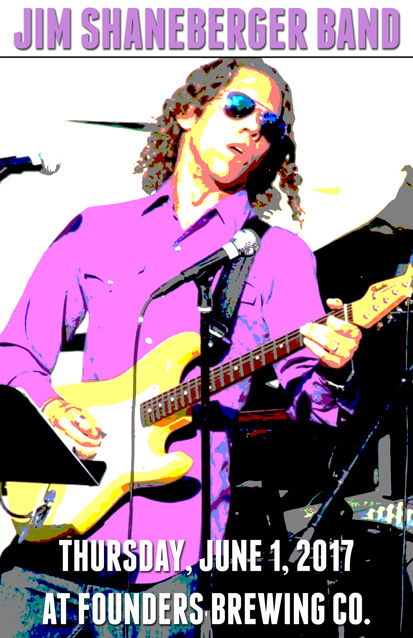