Songwriter and performing musician Jim Shaneberger has been a mainstay in the Michigan music scene for 15 years and counting, recording and touring with Flint, MI blues powerhouse Greg Nagy and the legendary Donald Kinsey.

Best known as a bass guitarist and vocalist, Shaneberger’s songwriting prowess makes its debut on Work in Progress. Recorded at Redwall North Recording Company in Grand Haven, MI, the songs boast a bluesy, funky, soulful combination with Shaneberger playing all parts except drums, which are held down by Jim’s longtime friend and bandmate Karl Schantz.

Shaneberger’s original songs are a showcase of his diverse range of musical interests, each drawing from a unique genre and theme. “Trouble” is an r&b song with socially conscious lyrics; his ‘change the world’ song. “Running Your Mouth” is a nod to old school blues with a few twists and some very frank lyrics. “Work in Progress” is a commentary on his own life philosophy about growing goals leading to new challenges. “Little Lylia” is a poignant acoustic guitar instrumental written for his baby daughter. “The Storm is Coming” is a song about planting his flag in the music scene as a solo artist, announcing his arrival and “Drinkin’ Muddy Water” is about the urge to travel and get his music out into the world, expressing the hunger for touring. Musically, it’s like Johnny Winter meets Led Zeppelin.

The Jim Shaneberger Band brings together adept musicians with backgrounds in blues, rock, gospel and funk for a lively stage performance. Schantz, featured on the album, and Shaneberger have worked together previously in the Greg Nagy Band, Mercurial Son and The Funky Gentlemen. Bassist Robert Pace is steeped in gospel, jazz and r&b and has played with Marvin Sapp, Ken Reynolds, The Williams Brothers, Twinkie Clark, The DeBarges and more. 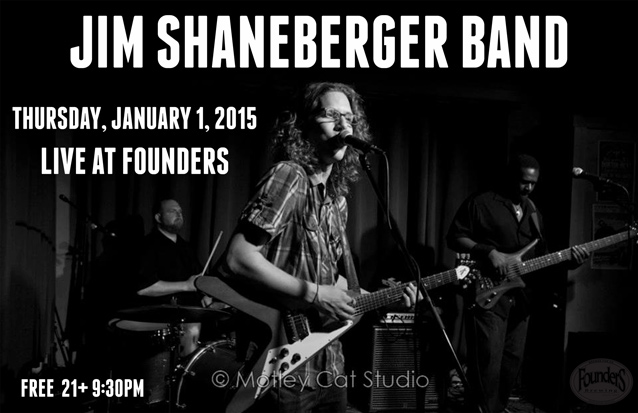