James and the Drifters (Indie Folk & Blues from Indiana)

James & the Drifters have always kept two goals in mind for every
performance, to promote positivity and play from the heart. The aphorism has
served them well as the band is one of the most talked about and loved groups
in Fort Wayne’s music scene. Their sound is the transfiguration of modern pop
folk into the likeness of the golden-era of rock.
Formed in the small town of Huntington in 2010, James & the Drifters was the
collective idea of three folk artists pulling resources. Less than a month after
sharing material Brent Chamberlin, Kyle Jackson, and Tyler Gault hit the studio
and in 8 hours the three men recorded over 20 songs featuring a wide-range of
folk instruments: the banjo, lap-steel, accordion, drums, guitar, and rich threepart
harmonies. “There was never a lack of songs and creative input,”
Chamberlin says. Over the course of the band’s five-year existence they have
recorded 2 eps and 2 albums, along with touring the Midwest extensively.

Immediately after forming James & the Drifters began booking shows and
playing anyplace that would host them; playing weddings, art galleries,
graduation parties, birthday parties, car shows, and of course the local Ft.
Wayne dive bars and restaurants. More recently the band has begun touring
regionally, including stops in Chicago, Columbus, Kansas City, Indianapolis,
Grand Rapids, and Nashville. Another aspect of the band’s mission to give
positivity is performing charity events and putting on concerts for the
incarcerated.

Stylistically the band has shaken off their dusty-folk/Americana-boots for the
tough thick-skinned sound of rock and blues. Melodic guitar riffs float sweetly
about one another while coastal three-part harmonies, pure and strong, move
along within the rock driven rhythm section. Putting a finger on the sound of
James & the Drifters typically harkens to contemporary bands such as Band of
Horses, Lord Huron, & NEEDTOBREATHE yet flows down a path of its own right.
Their fourth album “All That Gold” released independently on August 5th 2014.
The band continues to tour regionally to share their hi-energy performances
and build new relationships with their fans. 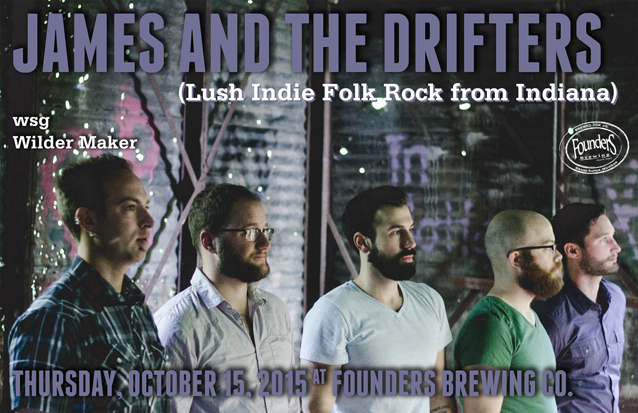