Founders Brewing Company is pleased to present an evening with

Nine years in the making, Chicago’s Henhouse Prowlers have built a reputation for hard work and non-stop touring, playing music inspired by the roots of bluegrass while branching out into a sound uniquely their own. From lightning fast picking, to sentimental ballads—playing storied original material, traditional songs, and contemporary covers—The Prowlers’ live show leaves no one wanting.

Their most recent album “Breaking Ground” grew out of collaboration and time well spent, having completed it within months of multiple cross-country US tours and the band’s third trip to Europe. Produced by Greg Cahill (Grammy nominated band-leader of Special Consensus), with special guests Josh Williams (of Rhonda Vincent and the Rage) and Anders Beck (of Greensky Bluegrass), this recording packs punch after punch.

The band was recently selected by the US State Dept. to spend a month in West Africa and will be headed back to Europe in 2014 for their largest tour abroad to date. The Prowlers continue to push the envelope with their highly original songwriting, tight arrangements, and electrifying stage presence. With the bluegrass mantle on their back and the best fans in the world by their side, The Henhouse Prowlers are here to stay for a long, long time. 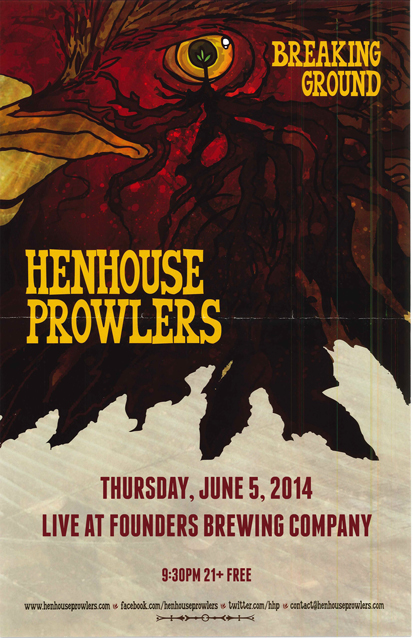