Genetics consists of four gentlemen from Michigan who decided to move to Colorado with a massive sound, and ready or not, they have hit the ground running. Their complex music with its heavy composition and heavy improvisation, combined with their wide scope of influences shimmering through their dynamic performance makes for an amazing and unique live music experience.

They have made quite a footprint in the last year alone, not only playing the inaugural Arise music festival but also opening up for acts such as George Clinton and Parliament Funkadelic, Toubab Krewe, Particle, Michael Kang (of SCI), David Murphy (formerly of STS9), Chuck Morris (of Nunchuck and Lotus), Dr.Fameus (Allen Aucoin of The Disco Biscuits), Ultraviolet Hippopotamus, Dopapod, Twiddle, and many more..

Genetics puts their all into every performance, and people are starting to talk. And with a full length album in the works, and shows at bigger and bigger venues in BOTH Colorado and their home-state of Michigan, Genetics is preparing for a full-scale American brain-invasion. Go see them live; no matter what you’re into, you’ll leave satisfied. 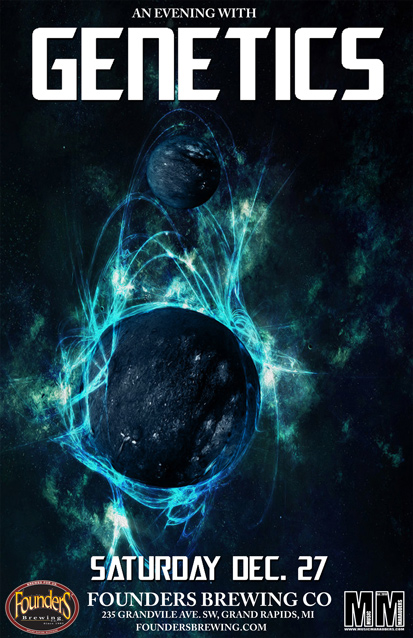