Genetics is a five piece progressive rock band that creates a new and unique sound while encompassing a large variety of genres. The band was founded in 2010 in Grand Rapids, MI by guitarist, Jeff Ervine and drummer, Nathaniel Snow. In the summer of 2012 they decided to move the project to Colorado, where they were then joined by bassist, Joel Searls in 2012 and guitarist/vocalist, Stanton Sutton (formerly of Mountain Standard Time) and Phil Johnson (formerly of Jet Edison) in 2015. With the recent addition of vocals and new material, they have found a massive sound.

The band has a wide scope of influences and they create their own brand of music that is heavy in both composition and improvisation. Their dynamic performance makes for an amazing and unique show, embodying the nature of progressive rock.

They have made quite an impact over the last few years, not only playing various music festivals, but also sharing the stage with acts such as George Clinton and Parliament Funkadelic, as well as members of Big Gigantic, String Cheese Incident, Lotus, The Motet, Dopapod, Twiddle and many others.

Genetics puts their all into every performance, and people are taking notice.  With the completion of their debut album, Dr.Spookymuffin, Genetics is preparing for a full-scale brain-invasion. 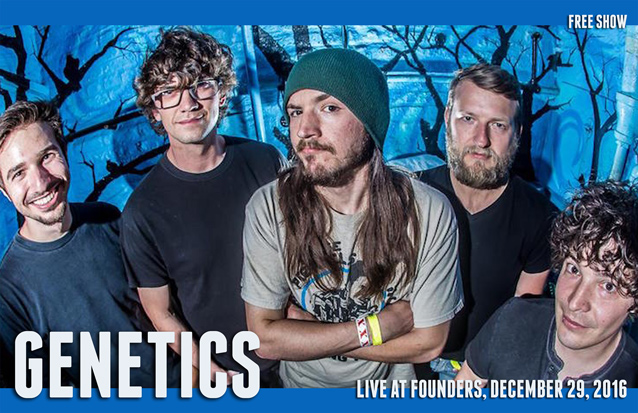