Tart, Tangy, Smooth, and oh so lip-smacking Sweet! Aaah yes, time to praise the almighty summer sippin’ thirst quencher, being served straight up G. Love and Special Sauce style, ice cool and always refreshing. On their second release for Brushfire Records, the Philly boys offer up “Lemonade”, a series of soul drenched tracks pouring out their blues infused hip-hop, which people have been trying to label for years. The best advice – dont try to tame it or claim it; its simply their sonic trademark, instantly recognizable and addictively delicious.

“The whole thing about lemonade for me was when I first set out from Philly to make it in the music world I went up to Boston, and I would just sit on the front porch of my place after playing the streets or practicing and make myself a big pitcher of lemonade. It just symbolized old time porch loungin’ for that’s where I did a lot of my shedding and writing. It was so simple and great, I said, if I ever get a record deal I’m going to get Lemonade tattooed on my arm.”

It’s there all right, and seven albums, thirteen years, and over a million worldwide units later, “Lemonade” is the most cohesive and rewarding album Garrett Dutton – a.k.a. G. Love (guitar, vocals, harmonica, sweat and tears) has ever delivered. Produced and engineered in the womb of Philadelphonic Studios by Chris DiBeneditto (Electric Mile & Philadelphonic) and faithfully anchored by the Sauce, Jimi “Jazz” Prescott (acoustic bass), and Jeffrey “Thunderhouse” Clemens (drums, percussion), G. pairs up with some of the best players in the game including Ben Harper, Donovan Frankenreiter, Jasper, Dave Hidalgo (Los Lobos), Blackalicious, Marc Broussard, Tristan Prettyman and Jack Johnson on a fourteen song celebration of his iconic career.

The tradition of the hip-hop blues has always been to rip open the heart and bare the soul. Tell the listener what they want to hear and you’ll have a fair weather friend; tell them the way it is and you’ll have true love. Thankfully, the Love is Alive, for G. delivers his loping lilt with bone humming honesty and he’s never sounded so clear. From the swarming infectious grooves of “Ride”, “Ain’t That Right”, and “Holla!” to the laid down easy of “Breakin Up”, “Still Hanging Around”, and “Missing My Baby” G. and The Sauce dance with the muses of their mentors, John Hammond, Bob Dylan, Jimmy Reed, De La Soul without ever missing the beat of their own signature time.

Pepper this with the mercury simmer of “Hot Cookin'” with Frankenreiter, the idyllic warmth of “Rainbow” with Johnson, the aching duet of “Beautiful” with Prettyman and the handclapping hallelujah of “Let the Music Play” with Harper and Broussard you’re left with the pure sound of summer ringing in your ear.

As G. says of all the collaborations, “We just reached out to a lot of our friends who just happen to be incredible musicians, and everyone was pretty enthusiastic about coming into the studio with us. So while the record maintains a real G. Love feel, it was a real group effort. Especially on “Let the Music Play”, I mean Ben and Marc just came down and demolished this track. We cut the rhythm track but left it wide open. So Bens comes through town and he’s just on fire. He wrote his verse on the spot, whipped up this tight Wurlitzer part and played a crazy slide guitar solo throughout the whole thing. I already had a chorus together, but he added this gospel style by stacking his vocals a bit which caught the vibe. To top it off I wanted to have Broussard sing some harmony on it, but once in the studio he wanted to try out one of the verses. I asked him if he thought he could do it and he says in his real New Orleans gruff voice, you think I came down here to suck, man? Well okay. Watch out, I mean I never appreciated what an incredible vocalist he is until he just went in, put his church on it and crushed it. To have Ben and Marc, who both come at music from such a soulful way, on the same track was simply epic.”

Even though G. is an insatiable musical omnivore when it comes to feeding off influences, “Lemonade” is his most stylistically cohesive and focused album yet. Grown out of the somewhat dark tension of “The Electric Mile” (2001) and the ass bumping smorgasbord of “The Hustle” (2004), “Lemonade’s” overall kickback beat begs the listener to blow out the speakers in musical reaffirmation. “Free” perhaps its deepest and most powerful track pulls the continuity string through it all, for its positive examination of the cycle of rebirth through a persons life backed with a “Fixin’ to Die” blues beat perfectly captures the sweat your funk out, soul searchin, dust ridden road warriors G. Love and Special Sauce have come to embody.

“I’m in a real comfortable place musically and in my life; I’m cruisin right now and it feels good. So when I set out to make this record, I wanted to take my sound, base it on the groove and really get into a deeper pocket. Lyrically, I wanted to talk about what I always talk about finding love, making love, losing love, life and lemonade.”

Yes indeed, what you hold in your hands is pure, fresh, organic, summer sound. So go ahead, scratch it, sniff it, squeeze it, bite it until its juices slide down your elbows and leave you satisfied. 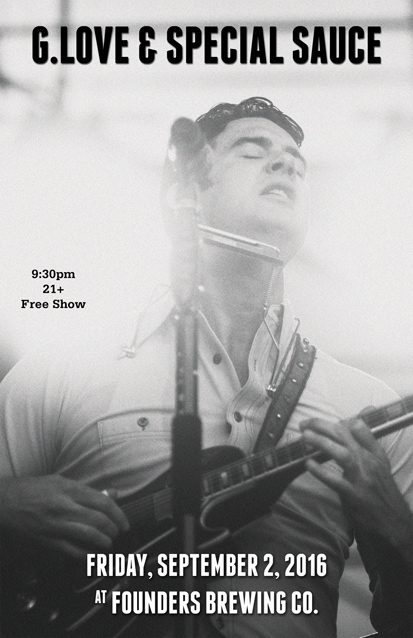