Founders Brewing Company invites you to join us for

Founders Fest 2017: A Celebration of Beer and Music (Our 10th Annual Street Party)

Advance tickets were available beginning Friday, April 14, 2017 at 11am EST via Ticketfly. Your paid admission ticket includes access to the festival, its entertainment and all of its potentialities, as well as your first beer. (Does not include Specialties. Don’t want the first beer? You can get two n/a beverages instead!)

TICKETS FOR THIS YEAR’S EVENT HAVE SOLD OUT. NO ADDITIONAL TICKETS WILL BE RELEASED. 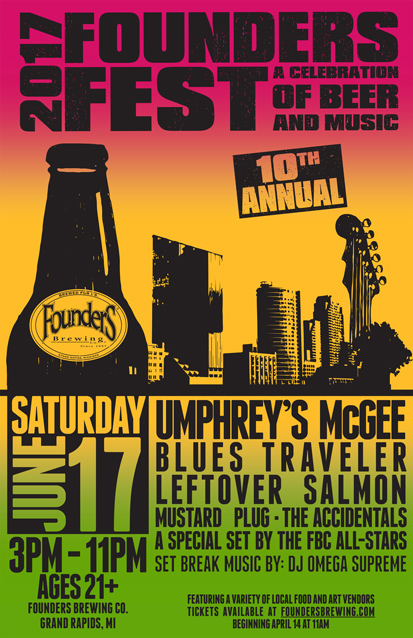 Below, you’ll find a bunch of answers to questions you might have about Founders Fest.

Here is a bit of info on the bands:

Umphrey’s Mcgee – After 19+ years of performing more than 100 concerts annually, releasing nine studio albums and selling more than 4.2 million tracks online, Umphrey’s McGee might be forgiven if they chose to rest on their laurels. But then that wouldn’t be consistent with the work ethic demonstrated by the band, which consistently attempts to raise the bar, setting and achieving new goals since forming on the Notre Dame campus in South Bend, Indiana, in 1997.

Mustard Plug – Mustard Plug started out in the punk clubs, basements and dive bars of the Midwest, playing punk-influenced ska music before most people in the U.S. had ever heard of ska.

In addition to the sweet tunes, there will also be acrobatics and roving entertainment provided by Grand Rapids’ own, Super Happy Funtime!

What does my ticket get me?

Your ticket nets you access to this 8-hour event and all of its fabulous entertainment as well as your first pint (not-including specilaties) OR 2 n/a beverages.

Where is Founders Fest?

What beers will be on tap?

Just like in previous years, we will feature this year’s edition of Founders Fest Wheat throughout the duration of the festival, as well as most of your favorite year-round Founders beers. Of course, like previous fests, you can expect a good number of surprises & rarities from the specialty tent.

Will we include Artist’s Row again?
We sure will! We’ll be showcasing the talent & wares of some incredibly talented local & regional artists.

I’m hungry! Will there be food vendors?
We’ve got a variety of local and regional food vendors to satisfy all of your cravings! Here’s who will be vending at this year’s FFest:

What the Truck? (Asian Fusion)

Can I bring my kids? My dog?

Unfortunately, no. Founders Fest is absolutely an ages 21 and up event only, and is only for adult humans. (Sorry, Fido!)

Why are ticket prices more expensive than last year?

Simply put, because we stepped our game up. If you look at ticket prices of each band on the lineup’s tour dates and combine them, you’ll see that the Founders Fest ticket is a huge value. Plus, your first pint is included.

How do I get there? Where do I park?

There are a wide variety of parking lots in the downtown area. (The Founders Customer Lot will be off-limits for the festival.) We recommend parking at one of the many area lots and walking to the festival, or better yet: walk, ride bikes, use a ride share service or public transportation. (We are conveniently located across from the Rapid’s Central Bus Station.)

When does each band play?

-All ticket sales are FINAL. No refunds
-Strictly Ages 21+ only
-No outside food or beverage
-No glass or growlers of any kind
-No pets (licensed service dogs OK with proof)
-No fireworks
-No illegal substances
-No weapons
-No bad attitudes
-Re-entry is NOT guaranteed, and is only permitted as capacity allows
-Empty (non-glass) containers for water or sealed bottles of water are OK
-No flag poles
-No totems
-No chairs on city streets

By use of this ticket, the ticket purchaser/holder (“Holder”) agrees that Founders Brewing Company shall have the unrestricted right and license to use the Holder’s image, likeness, name, voice, comments or other proprietary or public rights in any broadcast, telecast or photograph and/or video and/or audio sound recording taken in connection with the event or other transmission or reproduction in whole or in part of the event, for all purposes, without compensation.