Deep in the Northwoods of Wisconsin a group of pissed off bluegrass pickers decided they wanted to change bluegrass for all mankind. They failed to do so. Now, they just continue their barnstorm of the Mid-West in hopes of one day playing a song so fast, that it actually disrupts the space-time-continuum.

The EverGreen Grass Band was formed in 2008 over the course of many beer & whiskey fueled nights hosting the open mic at the Mousetrap Tavern in Eau Claire, WI. The 4-piece, including guitar, bass, banjo, & mandolin have been playing their distinctive and aggressive blend of bluegrass, punk, rock n’ roll, jam & country with various members consistently around the Midwest for 6 years.

The band plays around 150 shows per year and recently finished their 6th tour out west. They’ve carved out a large touring range in the midwest and have their eyes set on expanding to the west coast and as well as further into the east. Their first album “For Sheriff” was released in June of 2010 to rave reviews. The band is currently putting finishing touches on their second full-length, original album and beginning its 3rd.

Bringing an energetic and original act to any place they play, the EverGreen Grass Band has been winning ears and hearts alike with their straight-forward, face-melting ungrass songs, toe-tappin country tunes and original grass arrangements of covers in any genre. Always creating a good-time, drink ’em down atmosphere, the EverGreen Grass Band bring with them a genre-defying sound, a dedication to their live shows and an earnest understanding of what entertainment really is. 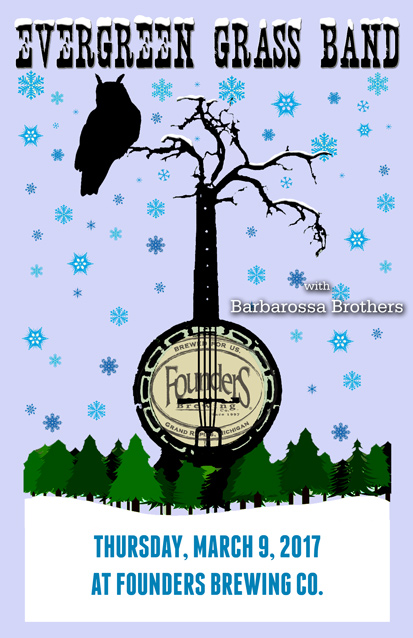