Join us Saturday, October 26, 2019 as we celebrate the last known release of CBS!

You read that right…this is the last foreseen time we will be making CBS.

We will have some tasty grill specials going from 3pm-8pm (stay tuned for a menu), live music starting at 9:30pm by Erin Zindle & The Ragbirds, and, of course, CBS 2019 will be flowing at the taps.

Erin Zindle is the songwriter, fiddler, and leader of the nationally-touring folk-rock band Erin Zindle & The Ragbirds. With a genre-bending hybrid of indie-pop melodies, global-infused beats, rock guitar riffs, conscious lyrics and virtuosic fiddling, Erin Zindle & The Ragbirds deliver something that’s hard to define.  Their music is equally danceable, intelligent, and vulnerable – a rare combination in an increasingly marketing-driven industry.

At each performance, Erin transforms into a seemingly-mythical creature who dances with graceful arms outstretched, hand-made wings glued to her shoulders, recklessly digging into her fiddle strings with her bow. Her voice is both earthy and ethereal, full of character and texture with lyrics that point to the daily paradox of intentionally cultivating hope in the midst of a crazed and jaded world. She skillfully switches between violin, kalimba, piano, and accordion, never losing her infectious smile.

Zindle’s songs are laced with edgy guitar riffs and solos, played by her brother T.J. Zindle. T.J. is an energetic force, armed with both electric and acoustic guitars, playing each with grit and intensity. Shannon Wade (bass) and Loren Kranz (drums) make up the rhythm section. Both are dynamic masters of their instruments and together they make a tight-knit groove factory over which Erin & T.J. can improvise with ease.

Since 2005 when Erin first created The Ragbirds, the band has gathered and maintained a passionate, grassroots fan base by continually reinventing themselves with an ever-evolving sound, while remaining rooted in the high-energy, world-inspired folk-rock that they have become known for.

With a change of cast in 2019, the band is shifting its weight and focusing more on the melodic components. The rhythms of their new sound leave room for the songs to breathe and for the vocals to take on the spotlight. Now equipped with four vocalists, the band is diving into the textures they can create with vocal harmonies and exploring the newly-created space with instrumental curiosity, adding more improvisational elements into the otherwise-tight arrangements.

The sweet energetic charm of lead singer Erin Zindle demands attention. She is an enigma of ageless quality, agile and joyful, yet rooted in wisdom. In her daily life, Erin is devoted to the tedious work of songcraft, but in her performances, the songs flow from her effortlessly, as if she is channeling them, radiating as she sings the words she has polished to a fine shine. She carries a certain bright-hot phoenix energy as she shares her stories of war and woe honestly and unapologetically. The pain in her songs highlights the wonder of the grace and freedom she embodies. Every live performance leaves the listener in a higher place than when it began.

Touring for nearly 15 years from their home-base of Ann Arbor, MI, Erin Zindle & The Ragbirds have developed a well-deserved reputation as one of the most dynamic, hard-working, high-spirited live bands in roots music. 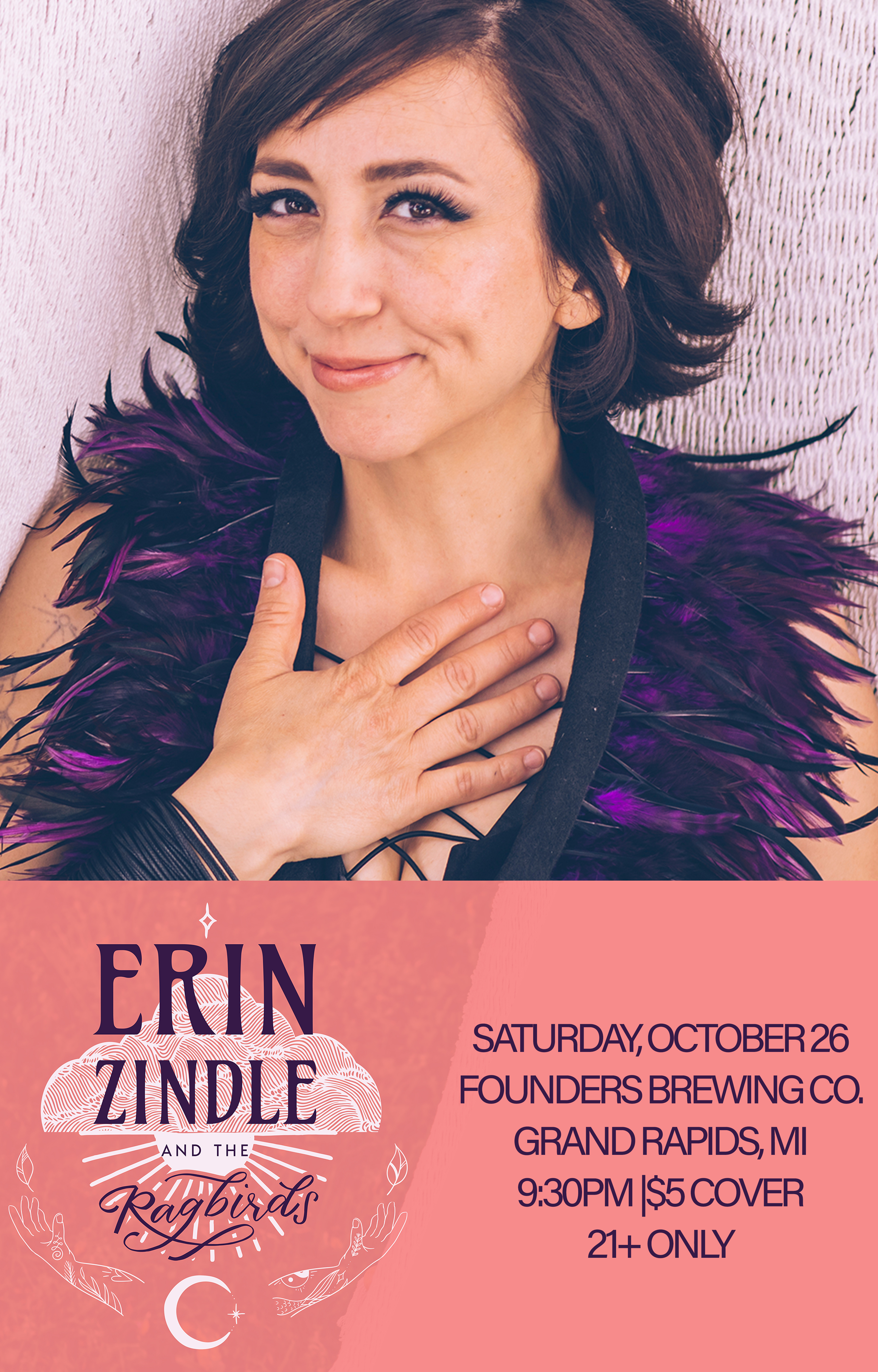