*Unfortunately the lead singer of Dangermuffin has lost his voice, and will thusly be unable to perform tonight. While this is regrettable, we wish him a speedy recovery, and look forward to BIG DADDY LOVE moving into the spotlight and rocking the house tonight!

Big Daddy Love’s ‘Appalachian Rock’—a unique and natural blend of rock, roots and grass—has landed this Western NC quintet on the radars of music lovers all over North America and beyond. Their new CD and DVD Live at Ziggy’s captures them with the lights on and the volume up at a hometown show at the venerable North Carolina music hall. Big Daddy Love (BDL) stretches the music out with top notch pickin’ and grinnin’ and delivers a stompin’ good time rich with authentic Carolina soul. Twang, rock hooks, psychedelia and lyrical complexity work together seamlessly to create a refreshing, original sound. Like a typical Southern rock line-up, the interplay between the lead instruments—Stratocaster riffs and soaring Allman-esque slide guitar on the one hand, and electric and acoustic 5-string Scruggs / Fleck style banjo picking on the other—leads the charge. Supported by a rhythm section that is equally at home in a groove or driving the bus with country, swing, funk or straight ahead rock, the band creates a striking dynamic that ranges from bombastic assaults to soothing grooves. Above the mix, the fiery vocals of Scott Moss, BDL’s new lead singer, calls attention to the good-natured yet thoughtful and sincere lyrics.

One of the most important new bands to watch in the Americana and roots rock community, BDL’s busy touring schedule has put them in front of audiences from the Rockies to The Atlantic, North to South, and provided them the opportunity to share the stage with the likes of Willie Nelson, Bob Seger & The Silver Bullet Band, Jim Lauderdale, Keller Williams and more smaller national and regional touring artists than can be counted. Away from the road, the band’s two previous releases– Let It Grow (2011) and To The Mountain (2010)—both on North Carolina label Little King Records—received glowing praise from the arts weekly and blog worlds and landed the band at #36 in the national Americana charts and #5 in the Homegrown Music radio charts. Essentially organic in composition and disposition, Big Daddy Love continues to grow as a band and inspire music lovers with an passionate and joyous live show.

“…a tightly-coiled energy always threatening to explode within each song, a choice group of collaborators, flawless musicianship and compelling vocals.”
~ Mountain Xpress

“…reminds strongly of the ‘60’s and ‘70’s when psychedelia and experimentation were entering the roots music genre quite handily, much thanks to the Dead, Barefoot Jerry and Kaleidoscope.”
~ acousticmusic.com 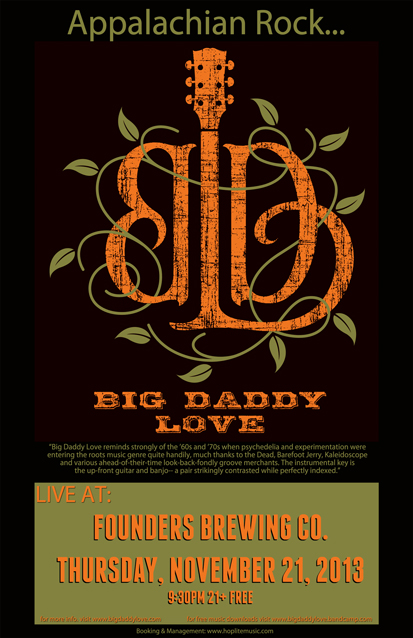 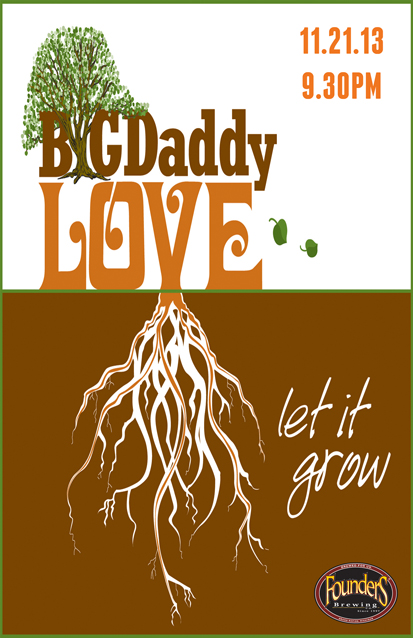