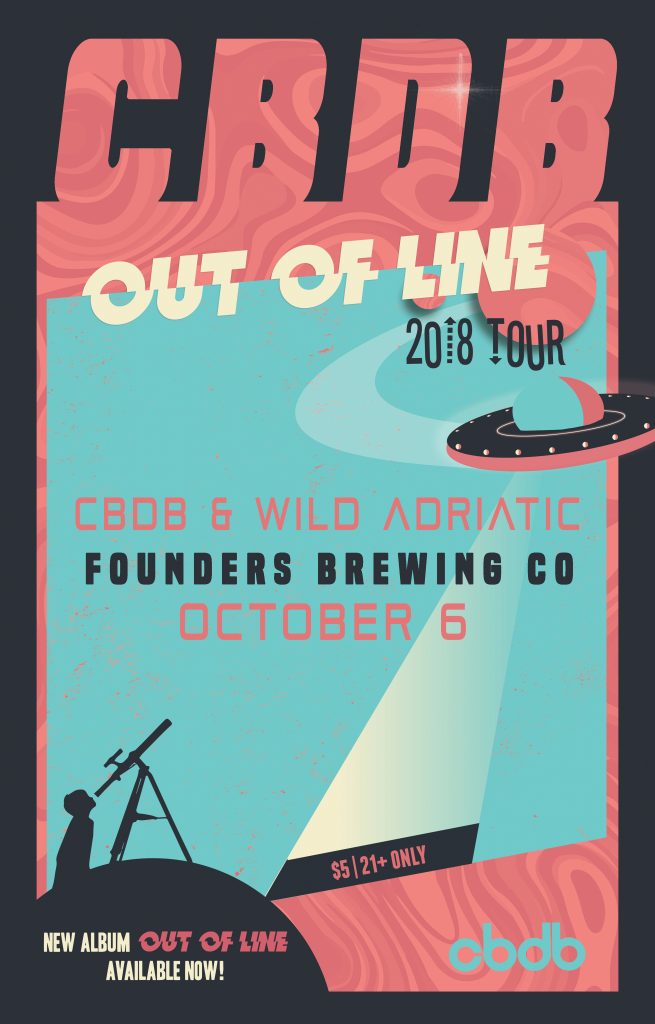 CBDB
CBDB is a progressive rock, jam-band from Alabama and their music is spreading from the southeast across the nation like wildfire. Defining a newfound, southern blend of joyous and progressive rock n roll, they channel a sonic mix of soulful vocals and virtuosic musicianship with smart, tasteful songwriting. On stage, each member of CBDB fluidly plays between complex composition and loose exploratory improvisation creating an incredible and unique live experience.

Fresh off the release of their impressive third full-length album “Out of Line” – recorded at Zac Brown’s legendary Southern Ground Nashville studio – CBDB is set to take the country by storm. Soaring monthly listeners and followers have further propelled their growth & continue to bring the band widespread attention, interest, and new fans daily. Dive into CBDB’s eclectic catalogue of tunes today and catch them live on tour near you soon!

Wild Adriatic
Rooted in the rowdy spirit of rock & roll, Wild Adriatic has built an international audience on a combination of groove, grit, and guitar-heavy swagger.
With the power trio’s newest album, Feel, bandmates Travis Gray, Rich Derbyshire, and Mateo Vosganian update the sound of their influences — from Seventies rock to Motown to soul — for a contemporary audience, taking influence from the past but never losing sight of the present. They aren’t revivalists; they’re modern men, carrying the torch of melodic, riff-ready, high-energy rock into new territory.

Whittled into sharp shape by a touring schedule that’s kept them busy for roughly 175 days a year — including two European tours, countless stateside runs, and appearances at festivals like Bonnaroo — Wild Adriatic’s three members recorded Feel in Austin, teaming up with Grammy-nominated producer Frenchie Smith in the process. The goal was to shine a light on the band’s strength as a live act, avoiding click tracks, digital instruments, sampled sounds, and other tricks of the recording studio. Instead, Wild Adriatic focused on the same core ingredients — Gray’s guitar playing and soulful sweep of a voice; Vosganian’s percussive stomp; Derbyshire’s in-the-pocket bass — that helped kickstart the band in 2011, back when Wild Adriatic formed in Upstate New York.

From the psychedelic “Chasing a Ghost” to the mellow, horn-filled “Come Baby Baby” — the latter song featuring blasts of brass from the West End Horns — Feel offers up 11 new songs of modern, analog, groove-heavy rock, with Wild Adriatic taking inspiration from breakups, friendships, new relationships, tour stops, and even politics. “Appleton” finds the guys paying tribute to the Wisconsin town that’s hosted some of their most most memorable shows, while songs like “Some Nerve” and “Hurricane Woman” channel the influence of guitar greats like Stevie Ray Vaughan and Joe Walsh. Much of the album came together during five separate writing retreats, including treks to Virginia, Texas and Wisconsin. Throughout it all, the songs were written collaboratively, molded by a band of longtime friends who, more than a half-decade into their career, are still turning over new leaves.