To label Calliope Musicals a band might be selling them short, because—while the six-piece group’s primary medium is music—their live show is an auditory, visual and genuinely transportive experience.

While the band describes their style as psychedelic party folk, the actual sound—a harmonious blend of drums, guitar, bass, a hybrid instrument known as a xylosynth and Fussell’s powerful voice—is hard to define and varies substantially by song. What is consistent, however, is the element of storytelling that courses through every track in the Calliope catalogue.

“Our music centers around a certain energy more than a certain style,” the perpetually barefoot Fussell says. “We’ll do rock, then dance-y disco, then some slow sit-down [songs]. At the end of the day, it feels like the music revolves around imagination and adventure more than it does a specific type of music.”

But lyrics and sound aside, perhaps the most captivating aspect of the group’s show is the integration of props. During most performances, beaming audience members can be found swaying with sparklers, bouncing with balloons, and singing along while waving cardboard signs hand-crafted from Shiner Bock boxes—all handed out by animal-costume-attired friends of the band. (Calliope has also been known to wield a confetti canon, to the chagrin of bar-backs everywhere.)

It’s these extra touches that encourage more crowd interaction and involvement than you’re likely to find almost anywhere else, making for a truly magical performance. 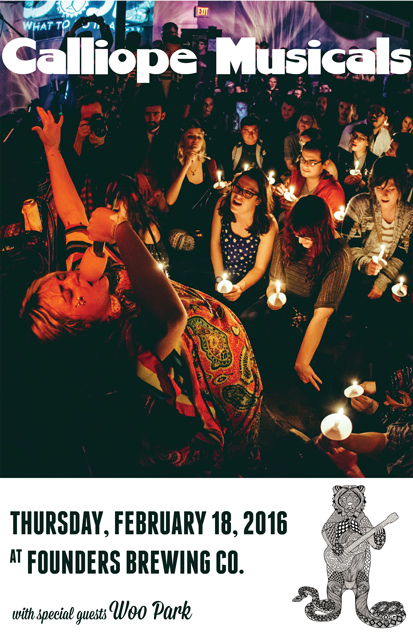