Black Jake and the Carnies (The Legendary Kings of Crabgrass from Ypsilanti, MI)

Think of a carnival, or indeed a carny, and it’s very likely that images of bearded ladies, mustachioed strongmen, trapeze artists, wolf boys, monkey mermaids and the like will come flooding into your mind. Add a healthy dash of punk rock and oldie timey music, and you have Black Jake & the Carnies.

These men create sounds that make Tod Browning’s Freaks look positively conventional. The glorious dichotomy is that the tunes are catchy enough to be disconcertingly accessible. You are, indeed, one of us.

“The idea for Black Jake and the Carnies came to Jake in 1999, when he had an ecstatic vision of a band playing fast-paced music on traditional instruments, full of entertaining gimmicks, props, and crowd interaction,” says the band. “The original incarnation of the band started in 2002, and played one disastrous Halloween Show at Trinity House Theater before breaking up.  Jake kept the vision alive and kept writing songs over the next four years until one day in 2006 he decided to get a band back together.  A few guys who knew some guys down the street eventually turned into a new Black Jake & the Carnies overnight.” 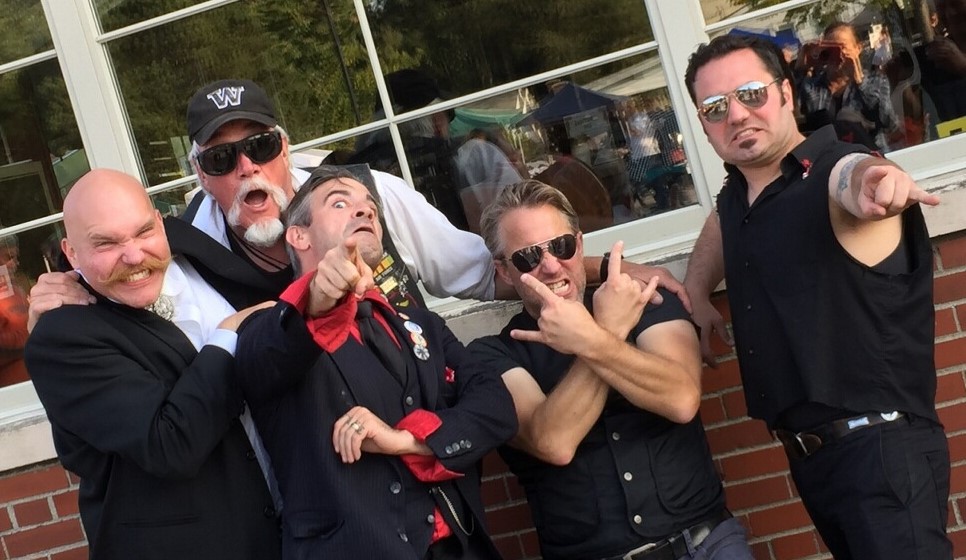 The band, comprised of Black Jake (banjo, vocals, kick drum, tambourine, songwriting), Kyle Kipp (guitar, backing vocals), Wally Jarvis (hand percussion, accordion, harmonica, backing vocals), Ozzie Andrews (bass), and Gary Ritter (Fiddle, Mandolin, backing vocals), are five hard-working men from Southeast Michigan who wallow in the imagery of sideshows and carnivals. “When you grow up in a small town, you have hair down your back and everyone’s a redneck, you get called a freak a lot,” Jake told Detroit’s Metro Times in 2011. “So I get attracted to the outcasts, the freaks, being somebody who’s on display.”

He’s not wrong. When Black Jake & the Carnies played a prison show in Belgium as part of the Belgium/Netherlands/Germany tour in 2011, the touring company said that they were the only band they’d ever seen who got the prisoners to jump up out of their seats and dance. And everybody knows how hard convicts are to please.

Black Jake & the Carnies released the Where the Heather Don’t Grow album in 2008, and followed it with the Sundry Mayhems album in 2011, the latter leading the Metro Times’ Brett Callwood to call it “an absolutely awesome album. Combining bluegrass-inspired cow-punk with Flogging Molly-esque Irish punk rock, the record genuinely sounds as if it was created by travelling misfits, in between palm readings and bare fist boxing matches.”

Meanwhile, Allmusic said that, “While the band’s music, a combination of Jake’s smartly penned originals along with the odd ’80s pop cover, certainly stands on its own, Black Jake & the Carnies’ stage performances combine audience-participation carnival games, periodic spinning of a wheel of fortune/misfortune, some pretty outrageous costumes, and enough raw energy to jump-start a Volkswagen. Jake’s banjo is even adorned with colored blinking lights. Yes, this is a band that knows how to have a good time and has fun doing so.”

Greg Molitor of Music Marauders said, “The bluegrass/folk/insanity theme works really well for these Carnies! Black Jake and Carnies was hands down the most energetic, wild, and flat-out enjoyable set of the entire weekend. I was a skeptic at first, but as soon as I saw the first Carnie jump from a 10 ft. speaker to the stage WITH HIS INSTRUMENT, I was sold. Sign me up for the next circus please!?”

Finally, Jeff Milo of iSpy Magazine said, “All the Carnies cut rugs like pure bottled lightning, they don’t play so much as they gracefully pummel, they pinball, even, from song # 1 to song  #13 ½ …or however long their sweaty sets go. Set aside their eclectic music, the Carnies’ blend spindly bluegrass and honky-tonk croons to some psychobilly-bent for punk-spat pirouetting; swampy yet sophisticated, old timey like a jukebox’s warble but warped and shoved and shunted with a rock n’ roll romp.”

With so much great press coming from so many high places, and with the band generating an enviable fan base throughout, it was no real surprise when it was nominated for two Jammie’s for Grand Rapids radio station WYCE:  Listener’s Choice and Best Roots Album for Sundry Mayhems.

The people have spoken and now it’s your turn. With two full length albums and an EP under their belts, Black Jake & the Carnies are going to begin recording a new album in spring 2017. The boys are also working on live videos and a mini-documentary. Now is the time to join in with the fun. After all, who doesn’t love a carnival? The thrills, the spills, the smells and the chills – Black Jake & the Carnies have got it all. 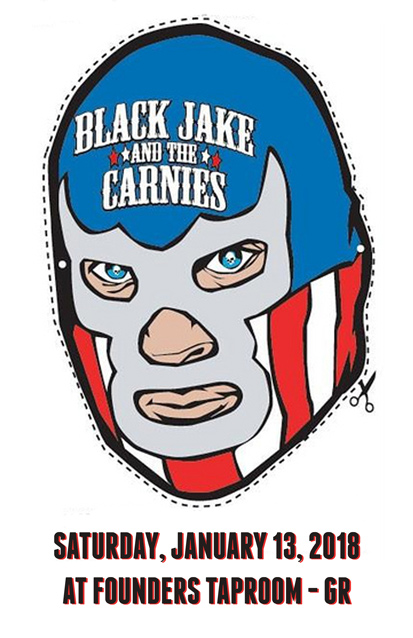