Birds of Chicago is a collective based around JT Nero and Allison Russell. Whether touring as duo or with the full family band, Nero and Russell have emerged as two of the most compelling new voices in North American Roots music.

For several years Russell and Nero’s respective bands, Po’ Girl (Vancouver, BC) and JT and the Clouds (Chicago, IL), have collaborated extensively, but in 2011’s Mountains/Forests, released under the JT Nero banner, they tapped into the true, bewitching power of their voices together on an entire record. It also featured the full cast of characters that would round out the Birds of Chicago ensemble — the Clouds and Michelle McGrath, the luminous singer and picker from the hidden hills of Southeast Ohio.

The record received critical raves and won them new fans on both sides of the Atlantic, and created a great deal of excitement for the first official Birds of Chicago album, self-titled release in November 2012.

Nero’s fractured country-soul voice wrapped in Russell’s silver and gold tones is a fine thing. Not too perfect, not at all saccharine, you’ll hear echoes of mountain gospel, street corner doo-wop, classic soul. Accompanied by just a banjo and a guitar, it’s chilling. Fired by a full band, it’s a full tilt revival.

Nero and Russell are most at home on the road – pick almost any night in the next two years and you can bet they will be in some festival, theater, pub, VFW hall, roller rink (they wish) or living room dovetailing their voices, singing their songs of hope, despair, love…. and electric seahorses.And honey bee apocalypses. And ice cream. It’s familiar and strange stuff – the everyday and the magical. Come see ’em, they won’t be hard to find. 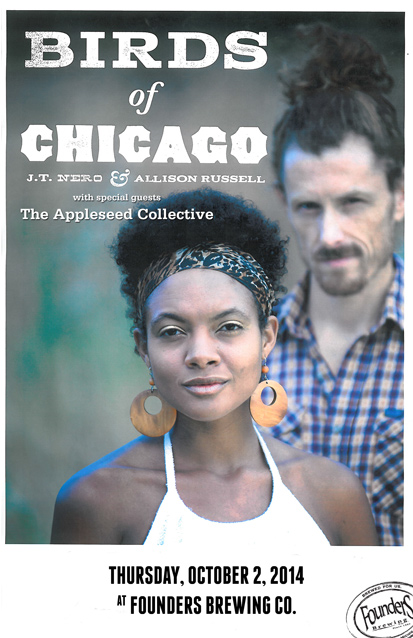