When Ben Daniels decided he was going to be a musician, it was more than a career choice. A natural poet, this young songwriter went to school on Bob Dylan, Robert Johnson, and Jack White, among others. His lyrics speak directly to a younger generation that hears, sees, and thinks about the very things he’s writing. From their opening song to the finale of their set, the Ben Daniels Band cuts through with their originality, musicianship, and a sound that spans Americana, Blues, Jazz, and Rock.

Throughout years of touring, BDB has played notable venues in Michigan such as the The Ark, The Blind Pig, and the Magic Bag, and have toured to New York City, Washington D.C., and Nashville . As a solo artist, Ben has stepped on the stage in Austin, TX at the Cactus Cafe, as well as The Barns at Wolf Trap. The son of actor Jeff Daniels, he has quietly monitored what it takes to live life as an artist. Beyond a passed down talent, the Ben Daniels Band believes in hard work, perseverance, and creatively challenging themselves and their audience.

With Tommy Reifel on bass, George Merkel on guitar, Wesley Fritzemeier on drums and mandolin, and singer/songwriter Amanda Daniels on vocals, BDB’s live show never fails to take over the venue. Their songs become anthems with arrangements that pull people inside their sound. With five CDs under their belts – Coming From The C, Checkin’ In To The Michigan Inn, Can’t You See, The Mountain Home EP, the dual album & movie release Old Gold and their most recent release, Roll – the Ben Daniels Band has grown to be a formidable group that sounds pleasantly familiar, yet unforgettably unique. 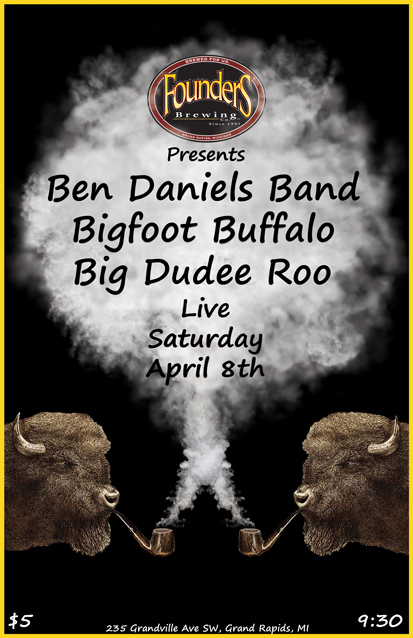