On March 16, we are partnering with the Grand Rapids Symphony as part of their 2015 Bach Festival! Come in and hear Bach like you never have before. Symphony violist Leanne King MacDonald will be performing works written and inspired by Bach from 8-10 pm.

Chicken Bach, a local philanthropic venture will be selling Chicken Bach Merch and coffee beans during Bach and Brews on March 16. Stop by from 8-10 pm, grab a beer, buy a t-shirt, and hear some great live music! The money raised goes to benefit programs of the Grand Rapids Symphony. 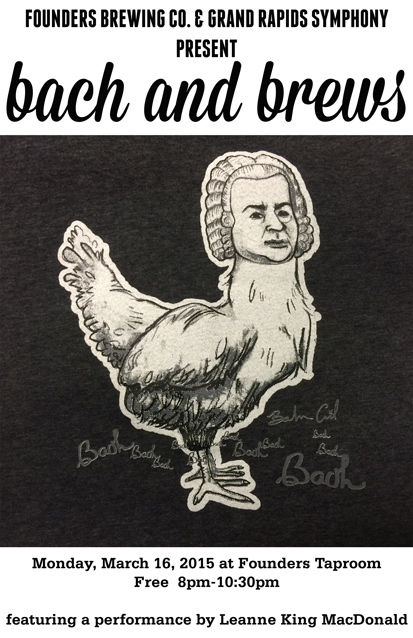 This collaboration will feature modern twists to Bach’s iconic work presented by GRS violist Leanne King MacDonald in the eclectic environment of Founders Brewing Co.  30-minute music sets will be offered on the hour from 8-10 pm.

From Leanne King MacDonald…”300 years ago Johann Sebastian Bach created sounds that were ahead of his time. Today the public is fortunate to have these iconic pieces.Twentieth century sound artist, John Cage, described music and harmony as ‘sounds heard’ and ‘sounds heard together.’ At parties, Bach’s favorite instrument to play was viola, as it put him in the ‘center of harmony.’ The center of my performance is the viola and its celebration by modern composers of American origin, all influenced by J. S. Bach. I am pleased to offer up a fresh interpretation of traditional Bach suites and new music for amplified viola and laptop.”