Andy Frasco, the 26-year old Los Angeles, CA native singer/songwriter/band maestro/entrepreneur/party starter/everyday hustler, and his band of gypsies “The U.N.” have been dubbed “Party Blues with a touch of Barefoot Boogie.” Frasco’s shows can be described as infectious, entertaining, and feel good. His performances are recognized as orchestrated chaos, inciting frenzied, undeniable good times, dancing, and perhaps even a good ole fashion freak out. Touring independently across the U.S. and Europe since he was 18 years old, Frasco first got his taste of the music industry managing and promoting bands when he was 16 years old -booking bands like Hello Goodbye, and working with labels such as Drive Thru and Atlantic Records, as well as venues like The Key Club in Hollywood, CA.  Since his start, Frasco has embraced a DIY attitude and work ethic, making the road his home; averaging 200+ dates a year over the past seven years, trekking over 200,000 thousand miles spanning the country dozens of times over, blowing minds and building a loyal following everywhere he goes. In 2011, Frasco was named the “New Artist to Watch” at Hatch Fest European Independent Film Festival, Orion Music Festival and Sundance Film Festival.

2014, Andy will be releasing his third, full-length studio album, produced by Grammy Award winning producer Charles Goodan (Santana “Supernatural”), who has also produced such artists/albums as Beck “Odelay” and “Midnight Vultures”, the Rolling Stones, Primus, and No Doubt to name a few, as well as composed the scores to Fight Club and Blow. Andy and his band the U.N. will also be performing on premiere festivals such as Wakarusa, Sundance, SXSW, and Electric Forest stateside as well as Paaspop Festival and Kings Night Festival (NL), as well as making a return trip to Macau, China. 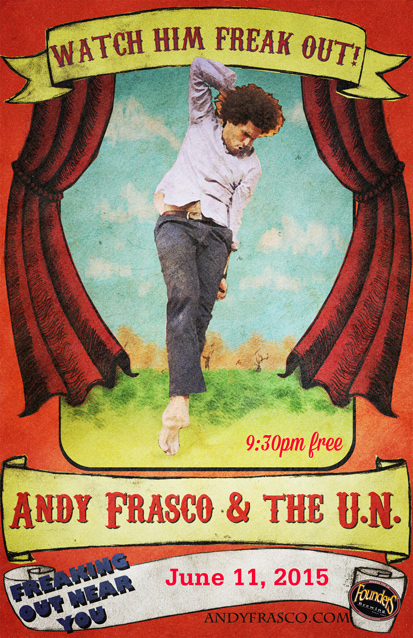