Alma Afrobeat Ensemble was founded in Chicago in 2003 by guitarist Aaron Feder. In 2006 Aaron moved to Barcelona in search of a different sound for the AAbE. He quickly found a group of international members, from all continents of the globe. In a short time the band was reformed and headlined the Fiestizaje music and arts festival in 2008.   The band then set about recording their first studio album, Toubab Soul which was released in 2010. Shortly afterwards, they released the remix album, Toubab Resouled, and opened the world music festival Cruilla de Cultures with Konono No 1.

Toubab Soul met with positive reviews from different international publications, such as Afropop Worldwide,calling the album “as dark and intensely danceable as any African musical experience can be”, and DJ Florodeclared the band the best representation of Afrobeat in the country. While their energetic live show was winning over audiences in Spain, their studio work was included in a compilation CD from Relix magazine, part of a world music compilation from TuneCore digital distributors, and used as the soundtrack for the first ever Nigerian-Spanish film, Super Zebraman. Their connection with the visual arts continued when they had music included in the television show Furgoaddictes, and they recorded the music for the national TV show Museo Coconut.

At the same time the band also began their relationship with manager Javi Zarco (Ojos de Brujo, Peret), who is also a founder of the Afrobeat Project cultural association in Spain. Their music was also included on an Afrobeat compilation from Paris DJs and later in the compilation World Music from Catalonia. Their live shows continued to grow in intensity, and they hit the festival circuit, playing at ImaginaFunk with Ebo Taylor, and closing out the WOMAD Canary Islands festival in 2011.

Fast forward to 2014, after two years of crossing the Iberian Peninsula and visiting the Canary and Balearic Islands on various occasions, they return to the studio to record their second album, Life No Get Dublicate. At the same time, the record label Slow Walk Music is formed, and AAbE is on board. The album is released at the beginning of 2014 and receives positive reviews from multiple international sources, with La Vanguardianewspaper saying the album is “worthy of Blue Note records”. The band is featured on PRI’s the World, and begins to expand outside of Spain. They are selected for the AA++ musical exchange with France, open the Mercé Festival in Barcelona for 10,000 people, return to a sold out show in the Canary Islands in the Umami Music and Arts Festival, and they are selected to tour Spain in the Girando Por Salas program. In November 2014, the band released a short animated film set to the song “Majority Whip”.

In 2015 the band changes direction a bit, with singer Joe Psalmist, from Lagos, Nigeria joining the band for their winter/spring tour of the peninsula, Balearic Islands and even a trip to the African continent to play in Ceuta. Additionally, they return to the studios of Radio 3 for another nationally televised in studio concert.

Joe’s soulful voice and inimitable stage presence brings the band to the next level. They spend winter recording a new album, and then spend the summer touring Spain and France once again, highlighted by multiple visits to Madrid in the Fiestas de San Isidro and the Festival de Cultura Inquieta, plus a return to Ibiza. Fall 2015 saw the release of their third studio album, It’s Time, combining brand new songs with brand new remixes as well. 2016 has seen the band on their first North American tour as well as hitting up London and France. 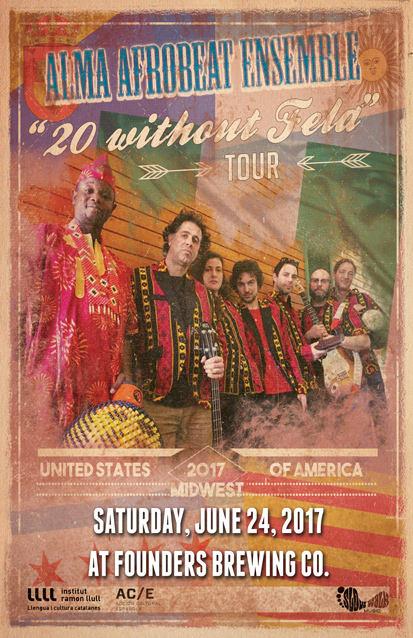