Afro Zuma is a Grand Rapid-based,13-piece collaboration of journeyman jazz artists, late night rockers, school music teachers and world traveling beat heads, all working together to pay homage to Afrobeat’s greatest artists, while drawing inspiration from their diverse backgrounds. Afro Zuma incorporates traditional rhythms from Brazil, Cuba, Guinea and Nigeria, weaving them into original drum arrangements, creating a mattress for a groove orgy of guitar, bass and keys, giving way to epic James Brown-inspired unison horn arrangements and solos, leaving the perfect frosting for this layer cake of funk, vocals inspired by Nigeria’s Yoruba tradition combined with call and response vocal harmonies bleeding of political injustice.
Zuma Rock is the second largest rock in the world and the cursed gateway to Nigeria’s capital city, Abuja, and symbolizes one of Africa’s most impoverished yet culturally affluent countries. Nigeria is the birth place of Afrobeat music, and of its father, Fela Kuti. From its birth in the late ’60s by Fela, his musical brethren, his political associates and his twenty wives at the club Afro Shrine, Afrobeat music has been a melting pot in which traditional Yoruba music, jazz, rock, and funk are fused together in an ever-evolving complex musical organism that has traveled to every part of the globe, evolving and absorbing culture as it goes. 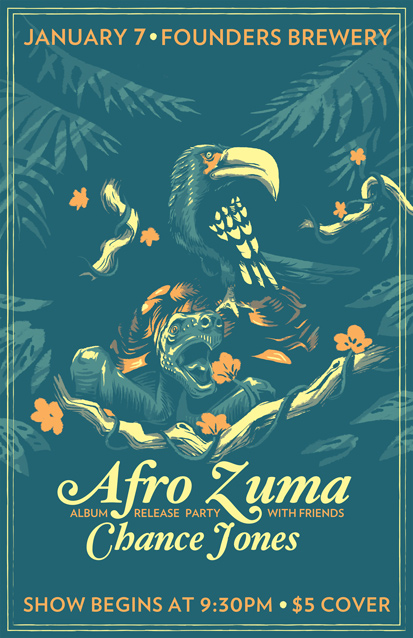