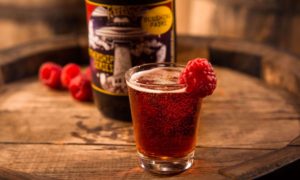 We introduced our Belgian-style raspberry ale to a tequila barrel and wound up with what can only be described as an international love affair. Tart and luscious raspberry jam character are balanced beautifully thanks to time spent aging in tequila barrels. Now who’s blushing? 10.8% ABV.

Blushing Padre will be available in 6-pack bottles exclusively in the Grand Rapids and Detroit taprooms beginning Wednesday, July 15. A limited number of kegs are shipping out and you’ll start seeing it locally in the coming weeks. Please note that draft will be available in all states except Mississippi and Utah. It will have a taproom retail price of $20/6-pack.